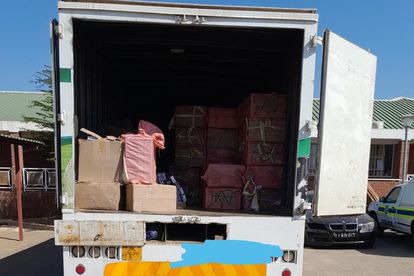 An animal food truck was busted with illicit cigarettes over the weekend. Image: SAPS.

An animal food truck was busted with illicit cigarettes over the weekend. Image: SAPS.

In a statement, the South African Police Service (SAPS) said, the relentless efforts made by the police in the fight against the smuggling and illegal trading in illicit cigarettes continue to yield positive results. This after the apprehension of two suspects along the N1 road next to Botlokwa on Friday 30 September 2022.

“The truck transporting animal food was stopped by the police along the N1 road towards Polokwane, as it approached Sekonye junction under Botlokwa policing area.”

This after information was received that the two suspects were actually transporting illicit cigarettes.

Police report that the truck was disguised to be carrying stacks of Lucerne in the rear section of the trailer to deceive the police.

“Upon further inspection, it was discovered that half of the front side was fully loaded with 104 cartoons of Remington Gold illicit cigarettes with an estimated street of R70 000.”

Police added that preliminary investigations revealed that the cigarettes were reportedly smuggled from Zimbabwe.

FIREARM RECOVERED FROM A PASSENGER

In a non-related matter, an intelligence-driven operation by police in Gauteng led to the swift arrest of a suspect and recovery of an unlicensed firearm.

Yesterday, 1 October police in Gauteng arrested a 26-year-old suspect for possession of an unlicensed firearm following an intelligence-driven operation in Heidelberg (Gauteng).

Police reportedly obtained information about a suspect making his way to Gauteng from KwaZulu-Natal. A team comprising of members from Crime Intelligence and Sedibeng K9 unit operationalised the information and intercepted a vehicle with three occupants on Standerton Road towards Heidelberg.

A search led the team to recover an unlicensed firearm and the suspect was subsequently arrested. The driver of the said vehicle and a passenger were not arrested; further investigation is still underway.

“The firearm will be subjected to ballistic tests to determine whether it can be linked to other serious crime committed,” the police reported.