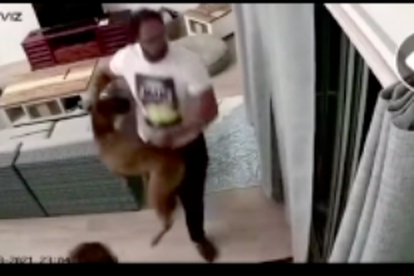 The disturbing video shows the man hitting the helpless pup, before throwing it outside through an open door. Photo: Facebook

The disturbing video shows the man hitting the helpless pup, before throwing it outside through an open door. Photo: Facebook

A recent video shared on social media is gaining traction after it was posted to the Gordons Bay Community Facebook page. The poster shared a video of two people, who are pet-sitters, abusing a boxer puppy.

We’ve included the video at the end of this article. Please note that it may upset some readers.

Abuse of boxer puppy: What we know

The video was initially shared on the Hermanus Community News / Gemeenskaps Nuus Facebook page by the dog’s owner’s, which highlights the abuse inflicted on the 7-month-old puppy, Hector.

The dog’s owners explained the incident took place while they were away from home. They had entrusted the puppy into the care of alleged perpetrators. The owners wrote:

“I feel obligated to warn people using this couple […] as pet sitters, after very disturbing video footage that we saw of how they treated our 7-month-old boxer puppy while we were this weekend”.

The Gordon’s Bay Community page also shared screenshots of perpetrators in question, and captioned the post:

“These two ‘people’ were caught on camera abusing a boxer puppy. According to the owners of this victim, this was not the first or last time that it happened”.

The poster asked that netizens “spread the world of these two mongrel creatures”. The pet sitting business in question has since been on the receiving end from Facebook users. One netizen wrote:

“I’ll make sure everyone knows not to use you at all”.

Another user hopes that the “truth comes out and that the [couple] will be punished”. Another described the pet-sitting business as a “horrible company making profit out of abusing puppies”.

A screenshot shared on Facebook reportedly shows the couple’s response. They claimed that the puppy “snapped” at them and they believe he has “serious behavioural issues and does not listen when spoken to”.

“We have never ever had a problem like this with any dog that we have looked after until now, and it is not in our nature to hit a dog or as you wish to call it, abuse a dog.”

The couple claimed that they had proof to confirm the owners were “satisfied with our services up until this incident. They also said it is “not okay to video our every move without or without the dog” as it amounts to an invasion of their privacy.