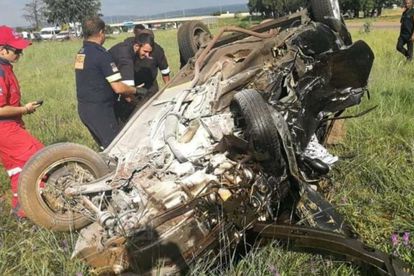 Andrew Kagiso Malele has been sentenced to eight years imprisonment for the deaths of Ruan Coen and Jessika Kennedy. Photo: AfriForum.co.za

Andrew Kagiso Malele has been sentenced to eight years imprisonment for the deaths of Ruan Coen and Jessika Kennedy. Photo: AfriForum.co.za

Andrew Kagiso Malele was sentenced to eight years behind bars for culpable homicide.

Malele is accused of causing the deaths of a young couple 26-year-old Ruan Coen and 25-year-old Jessika Kennedy. The horrific car crash that took the lives of the newly engaged couple occurred five years ago.

Malele was sentenced after he appeared before the Pretoria Regional Court on Thursday, 21 July. He was sentenced to a further three years’ behind bars for drunk driving and the sentences are to run concurrently.

The Pretoria Regional Court went a step further and also cancelled the accused’s driver’s licence. Malele pleaded guilty to the crime in the same court in May of this year.

His prosecution followed the involvement of AfriForum’s private prosecution unit. Since news of Malele’s sentencing broke on 21 July, AfriForum welcomed the sentence stating that it should send a strong message to would-be drunk drivers in SA.

Magistrate Kallie Bosch noted that the incident was a very traumatic one for the families of the young couple. She stated that the court has a duty to send a message to those who commit crimes such as drinking and driving and that they need to be severely punished, reports TimesLIVE.

Justice at last: Five years on, man ADMITS to crash that killed couple

Previously, it was reported that after five years, Andrew Kagiso Malele has pleaded guilty to culpable homicide. Malele was accused of causing the deadly crash which killed 26-year-old Ruan Coen and 25-year-old Jessika Kennedy.

The incident occurred on 23 December 2017. Last year, the matter was enrolled after AfriForum got involved. Malele crashed his car into the vehicle that Coen and Kennedy were driving. The couple got engaged just three weeks before the incident.