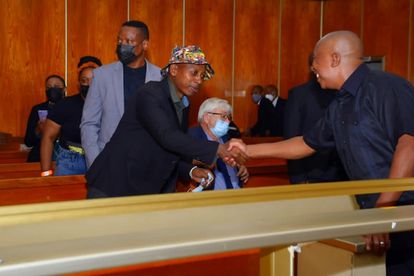 Former ANC Youth League deputy president Andile Lungisa made a surprise appearance in court to show his support for EFF leader Julius Malema. The Economic Freedom Fighter leader was in the East London Regional Court on Thursday to face his rifle assault case.

Interestingly, Lungisa had served as Malema’s deputy in the ANC Youth League for three years between 2008 and 2011.

Malema had been expelled from the ruling party by its disciplinary committee which had been chaired at the time by former minister Derek Hanekom. This had been the result of the EFF leader being found guilty of creating division within the ranks of the ANC and bringing it into disrepute.

Commenting on his appearance during Malema’s trial, Lungisa had explained that he supported the EFF due to his fight for economic freedom.

Lungisa explained that he is a firm believer of what the Red Berets stand for, but warned that his appearance in court should not be viewed as a sign of interest in joining the EFF.

“I am here as both an ANC member and as an individual. Even when I am sleeping or waking up, I am an ANC member. This is the former president of the ANC Youth League – a revolutionary continuing with the perspective of economic freedom in our lifetime. We need a united front in order to change the situation in our country. Lungisa and Malema have stayed loyal to each other throughout the years.”

Earlier, Lungisa had been imprisoned in late 2020 and Malema had made his desire to assist very public. At the time, Lungisa had been convicted and sentenced to three years in prison, with one year of the sentence suspended.

The sentence had been imposed for assault with the intent to cause grievous bodily harm. This had been in connection with an incident in the Nelson Mandela Bay council, which took place in 2016.

Lungisa had been found guilty of smashing a glass jug against the head of DA councillor Rano Kayser.