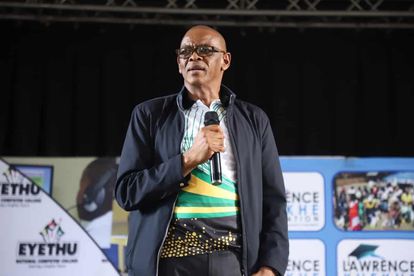 The African National Congress (ANC) said it is yet to formally meet to discuss the arrest warrant issued against its secretary-general Ace Magashule and is therefore not in a position to express itself on Magashule possibly stepping aside.

The Directorate for Priority Crime Investigation also know as the HAWKS confirmed that an arrest warrant was issued for Magashule on Tuesday 10 November 2020.

The case relates to the controversial R255 million Free State asbestos tender awarded during his tenure as Premier of the Free State.

The contract which the state revealed was outside of the normal procurement process, was for the audit and assessment, handling of hazardous material removal and disposal of the asbestos in the Free State Province.

The ANC’s Dakota Legoete revealed that they learned of the arrest warrant through the media while on their door-to-door by-election campaign trail in Soweto on Tuesday morning.

“We were doing elections with the SG in Mdeni Johannesburg metro when we learnt that there is a warrant of arrest that has been issued against the SG, we learnt through Daily Maverick,” said Legoete.

“As the African National Congress this is news to you, we have noted and have to discuss. As it is for now the application of step aside will not be automatic until the leadership of the ANC has sat and pronounced itself on the matter” he said

Legoete was quick to state that the matter remains between the SG in his former capacity as premier of the Free State and the law and not the political party. Magashule has stated previously that he would never step aside over corruption allegations.

The call for party members to step aside has been a very controversial one, with the likes of ANC KwaZulu-Natal deputy chair Mike Mabuyakhula having voluntarily stepped down last year in August. He was charged for defrauding the province of around R28-milion by paying for a jazz festival that never took place. He has since been re-instated, while the matter is yet to be finalized in court. Limpopo provincial treasurer Danny Msiza has also returned to his post after being implicated in the VBS Bank saga.

Magashule is expected to appear at Bloemfontein Magistrate’s court on Friday.