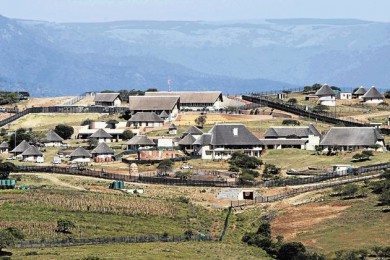 ANC secretary general Gwede Mantashe has addressed the media regarding the release of the Public Protector’s â€œSecure In Comfort” report into the amount of public money spent on developing President Zuma’s private residence in Nkandla. The investigation has taken five years and the fact that the findings have been made public just a few weeks before the elections has resulted in accusations of political motivations.

Mantashe said that the ANC is â€œrelieved the Public Protector’s report has finally been released, but timing remains a concern.” However, Public Protector Thuli Madonsela responded to this accusation by saying that â€œit is surprising that the ANC is concerned about the timing of the report when it is they who asked that it be released before the elections.” Mantashe also claimed that the delay of the report was the Public Protector’s fault, to which Madonsela responded by pointing out that it took President Zuma nine months to respond.

A government task team carried out a simultaneous investigation but was described by the PP’s office as â€œa process by junior officials that report to those that asked them to investigate… The Government Task team was not a legal body and its investigation was an internal process. It also had a narrower scope. [Madonsela’s report] therefore overrides that of the government task team,” which reported in 2009 that President Zuma was not guilty of any wrongdoing because he had a responsibility to improve the security of the property. 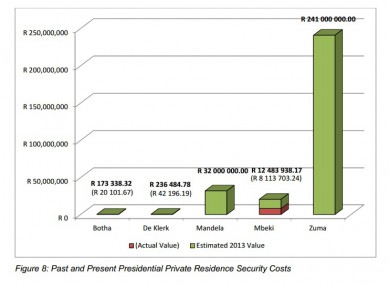 The PP has said that Zuma must pay for some of the upgrades and the exact amount should be determined by non-ANC government ministers. Nkandla is the President’s private residence – he has access to two other state residences – meaning that he has directly benefited from public funds. This has resulted in debates regarding whether the R246 million investment was some kind of golden handshake or – in the words of the Daily Maverick’s Richard Poplak –  â€œan architectural manifestation of his power and status.” That figure, equivalent to £13.8m, is more that 1,000 times that spent on security upgrades to the home of FW de Klerk, South Africa’s last apartheid-era president.

Speaking to Redi Tlhabi on Talk Radio 702, Madonsela said, “Zuma did not wilfully mislead Parliament but gave wrong information because he understood the question to be referring to old structures,” although it has been confirmed that he lied to Parliament when he claimed to have taken out a mortgage to pay for some of the redevelopments.

There are also other examples of corruption beyond the misappropriation of public funds, for example, the architect Minenhle Makhanya worked for both the state and Zuma personally and, according to Madonsela’s report, â€œthere is no evidence that Makhanya had any experience in the design of security related projects. The argument presented that being an architect qualifies him to design security installations has the same implication as arguing that just because I’m a lawyer, I’m an expert at any area of the law. That cannot be logical.” There were also no design plans handed into the Department of Public Works Security Committee.”

Helen Zille’s Democratic Alliance (DA) has reiterated its call for Zuma’s impeachment. City Press’ Paddy Harper reported that â€œhalf the Democratic Alliance is here (in Nkandla)” and that â€œthey must be laying several hundred charges” while EFF leader Julius Malema is also expected to open a case against the President today.