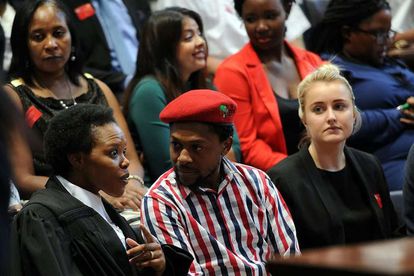 While the ANC denies Marius Fransman’s reinstatement as western Cape chair; opposition parties and civil society organisations have expressed their outrage that a man who stands accused of sexual harassment has, according to some reports, been given back his job.

“This decision demonstrates that in the ANC those who undermine women, who use their positions of power to sexually harass and violate women, get protected and promoted to even share the stage with the president,” Ndlozi said.

He added that, seeing Fransman step back into the spotlight alongside Jacob Zuma “serves as a clear validation of his position, despite the sexual harassment case”.

“The EFF is not shocked though that it is (President Jacob) Zuma who personally went to exhume Fransman out of the sexual harassment shame he was being subjected to. This is because Zuma himself shares the same attitude of misogyny, patriarchal dominance and sexism that led Fransman to sexually harass his assistant.”

“In essence, Zuma and Fransman share an anti-women sexism bond which characterises many in the ANC leadership. Zuma is able to overlook what Fransman did because Zuma is the number one sexist in our country.”

Ndlozi went on to say that women and feminists should, in light of the ANC’s ‘decision’ to reinstate Fransman, realise that the ruling party doesn’t care for their rights.

“Women who get sexually harassed by ANC bigwigs will never report such crimes anymore because they do not get protected and supported, neither do they get justice. Instead their offenders, like Fransman, get to be endorsed by the head of the party. Victims of sexual abuse have no support, whist perpetrators get to be publicly validated, sharing the stage with the President.”

He added that by reinstating Fransman, the ANC has both validated rape, as well as contributed to SA’s rape culture.

“At the centre of the promotion of rape culture is precisely that perpetrators of sexual offences get celebrated and a sense that reporting them is futile has been reaffirmed by the ANC as nothing happens to them.”

“This is why many women who are raped and sexually harassed never speak out, because there is always a Zuma who undermines them and promotes, protects and celebrates their offenders,” Ndlozi said.

Nomvula Mokonyane, who heads up the ruling party’s 2016 election campaign, told News24 that Fransman has been reinstated as Western Cape ANC chairperson.