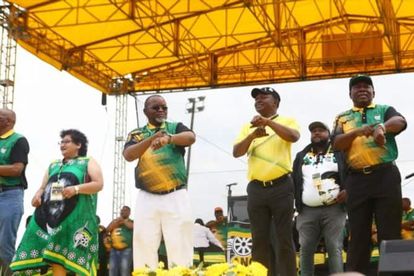 For the first time in years, South Africans are actually looking forward to a cabinet reshuffle. While we can all pretty much guess which ministers will be getting the chop, the issue of deputy president is a bit more complex. From Sunday, the ANC will be locked in talks as they look to confirm the new cabinet.

The ANC has announced that there will be a special two-day meeting of the party’s National Executive Committee (NEC) from Sunday afternoon. According to the Parliamentary schedule, the deputy president of the country will be answering MPs questions on this coming Wednesday.

The effective Wednesday deadline means President Cyril Ramaphosa has to take his party into consultation as he looks to get the cabinet finalised by early next week.

The last few NEC meetings were all about how to get Zuma out, now they’re about getting the right people in and trying to keep everyone happy.

There are three people in the running for the job: ANC Deputy President and Mpumalanga Premier David Mabuza, Minister of Science and Technology Naledi Pandor and Minister of Human Settlements Lindiwe Sisulu.

While Sisulu was Ramaphosa’s first pick to be his Deputy in the ANC, she lost out to Mabuza by a huge number of votes. Since Ramaphosa became President of the country, Pandor has been tipped as his new favourite for the country’s number two.

News24 are however reporting that Mabuza is hungry for the deputy president position. With his role in the ANC certain, it could potentially be difficult for Ramaphosa to pick someone else.

The argument Ramaphosa can use, however, is one that it’s time for the country to have a woman deputy president. The ANC had raised concerns over the number of women in the top six since the party conference in December.

Will the Women’s League and other groups now support the call for Sisulu or Pandor to lead government business?

While both Pandor and Sisulu had their “job interviews” during the SONA debate this week, South Africans seem to be looking to avoid Mabuza at all costs.

With countless allegations of criminal activity and corruption, this weekend’s special NEC meeting will be crucial for the future of the country.

Read: Who is David Mabuza? The ANC’s new Deputy President