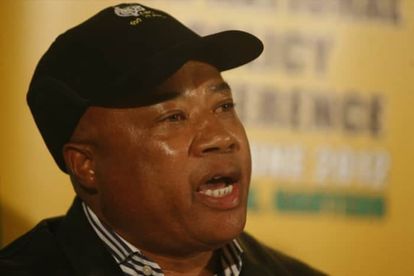 “In today’s ANC, the leaders put themselves first, and the masses second,” he told around 1 000 people at a memorial for late former Cuban leader Fidel Castro in Khayelitsha on Wednesday.

Water and Sanitation Minister Nomvula Mokonyane, Social Development Minister Bathabile Dlamini and ANC Chief Whip Jackson Mthembu were on the stage with him.

Yengeni said the ANC and South Africa could draw lessons from Cuba and Castro. He said the party and the alliance should conduct an analysis on how to solve the “political turmoil” engulfing the party.

Leaders were fighting with each other publicly over positions. Members needed to stop speaking out against one another in public, he said.

Yengeni flirted with telling the crowd what happened at the ANC’s national executive committee meeting over the weekend “from the horse’s mouth”. The NEC rejected a proposal to ask President Jacob Zuma to step down.

Yengeni reasserted that Zuma remained the president of the ANC and the country, to cheers from the crowd.

Deputy President Cyril Ramaphosa was the main speaker on the night but had still not appeared on stage more than two hours after the event was expected to start.

Mokonyane led a five-minute round of praise-singing while they waited for Ramaphosa to appear.

Castro’s ashes began a four-day journey across Cuba on Wednesday, from Havana to their final resting place in the eastern city of Santiago.

A small, Cuban-flag covered cedar coffin containing the remains of the 90-year-old leader was taken out of Cuba’s Defence Ministry just after 07:00 and placed into a flower-bedecked trailer pulled by a green military vehicle for the more than 800km procession.

The ashes will be interred on Sunday, ending the nine-day mourning period for the man who ruled the country for nearly 50 years.

The route traces in reverse the victory tour Castro and his bearded rebels took after overthrowing the forces of strongman Fulgencio Batista in 1959.

Zuma praised Cuba under Castro for its record on education and health care and its support for African independence struggles.

Castro would be remembered as “a great fighter for the idea that the poor have a right to live with dignity,” Zuma told the crowd on one of the legs of the journey in Cuba.