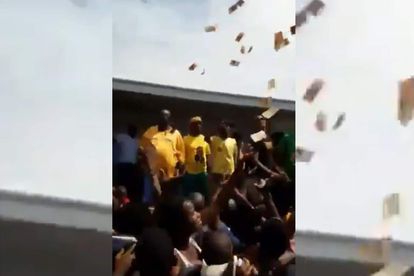 The African National Congress (ANC), has remained silent on the allegations that its leader in the Ehlanzeni region in Mpumalanga, has been caught on video, throwing money to a crowd ahead of the provincial conference.

A video posted on social media on 5 November 2019, shows a group of people wearing ANC T-shirts, standing on a mobile stage and throwing, what looked like, banknotes to a crowd. The bank notes were dispersed in small numbers at first and then it looked as though a large number of notes were thrown in the air, causing the crowd to scream with excitement. In the background, loud music could be heard.

According to the Political Bureau, a man by the name of Ngrayi Ngwenya had been reported to be a supporter of Premier, Refilwe Mtsweni-Tsipane, who is believed to be the front-runner for the provincial chairperson race. The provincial conference had been scheduled to be held in February 2020.

ANC spokesperson, Pule Mabe was contacted regarding the claims that Ngwenya threw money but did not respond. According to the Mail and Guardian, Mtsweni-Tsipane was backed by deputy president, David Mabuza as the next provincial chairperson.

Money could be seen as bribery or gift

Political analyst, Professor Bheki Mngomezulu said it was unclear whether the ANC gave the money as bribery or a gift.

“Another person would argue that these people needed money and they were just given money out of love, while another one would say the timing is questionable and therefore this amounting to bribe.

If it is an ordinary gathering, which had nothing to do with elections, other people could say you are investing because you know that in the near future there would be elections,” said Mngomezulu.

‘Do not buy votes‘

Mngomezulu said all political parties, including the ANC, should act against the practise of buying votes.

“If there is a view that by giving out money to the electorate, you are literally buying them, then by the time the elections come and you win, people will say you did not win based on merit but because you gave away the money. Therefore the party has to do something for its own sake,”  said Mngomezulu.