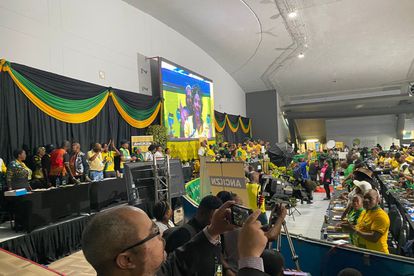 The ANC KZN is hosting its ninth elective conference and no women made the cut for the party’s top position. Photo: @ANCKZN / Twitter

The ANC KZN is hosting its ninth elective conference and no women made the cut for the party’s top position. Photo: @ANCKZN / Twitter

The African National Congres (ANC) is currently hosting its ninth provincial elective conference in KwaZulu-Natal (KZN) and there are no women candidates for its top position.

Who is in the running for the top ANC KZN position?

Finance MEC Nomusa Duba-Ncube is out of the race as she could not obtain enough support in order to qualify for the position during the nomination process on Saturday, 23 July.

It seems Premier Sihle Zikalala and member of the KwaZulu-Natal Provincial Legislature Siboniso Duma are the two candidates that are remaining to contest the top position for the party.

eNCA reports that Zikalala is hoping to retain his position as delegates at the conference are currently voting.

Nominees for the other positions

While Zandile Gumede made the cut for the position of treasurer, she was disqualified due to the step-aside rule. Businessman Sandile Zungu decided to decline the nomination.

Education MEC Kwazi Mshengu and MEC for Health Nomagugu Simelani are to stand for the position of deputy chairperson. In terms of provincial secretary, Mduimseni Ntuli and Bheki Mtolo are going head to head.

Cogta MEC Sipho Hlomuka and Nontembeko Boyce will be battling it out for the position of deputy secretary.

In order for the candidates to be elected into the top five, they will need 804 votes or more. This will allow them to take on their new role and lead KZN for the next five years.

In other news about the conference, it was previously reported that KZN Premier and outgoing African National Congress (ANC) Chairperson in the province has defended the singing of ‘Wenzeni’ uZuma’ song at its elective conference held in Durban.

The ANC in KZN is holding its 9th elective conference at the Olive Convention Centre in Durban which started on Friday, 22 July. Ahead of ANC Treasurer General Paul Mashatile’s address the over 1500 delegates from various branches within the province decided to sing Wenzeni uZuma meaning what has Zuma done?.

It is no secret that former President Jacob Zuma is loved by many ANC members from KZN and this could be the very same reason the same song has been sung at some regional conferences held recently. Read the full story here.