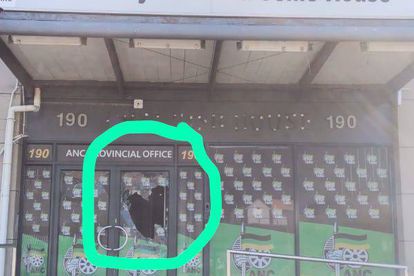 The African National Congress (ANC) headquarters in KwaZulu-Natal (KZN) were on Sunday attacked by a man who reportedly claimed that he was fed up by President Cyril Ramaphosa and former President Jacob Zuma.

According to reports, the man threw a brick at the building in Durban central. He wanted to kill Ramaphosa and Zuma. He further said that Zuma must bring his machine gun to face him. He has since been arrested.

In a video, the man can be heard saying that he has lost everything and is blaming Ramaphosa for that. He further says that Ramaphosa is a coward because he knows what he is “doing” and he should be brought to him.

“Other presidents can walk on the streets to meet their people, but Ramaphosa never does that. He is always accompanied by scores of police and armed security, why? He knows what will happen to him,” the man says.

“Njabulo Ngubane appeared today in the Durban Magistrate’s Court and was remanded in custody until  28 February 2022 for bail application.”

Meanwhile the ANC KZN Facebook page was hacked over the weekend.

The party said hackers appear to have gained access to the page’s security settings and removed all admin personnel who are members of the ANC’s Department of Information and Publicity.

The ANC in KZN said they understand that the hackers are also attempting to report the page to Facebook with the intention of getting it taken down.

ANC KZN spokesperson, Nhlakanipho Ntombela said the party’s political opponents are clearly threatened by the popularity of the page, which had become the ANC KZN’s trusted voice and authority on information.

“The ANC has been a target of a plethora of attacks over time, and, in hindsight, it was a matter of time before our enemies and enemies of progressive forces resorted to this kind of sabotage.

“We are appealing to the public to be circumspect when engaging with the page in its current form, and not to interact with it or accede to any pleas that the hijackers of our page might make, including requests for money transfers, as per popular modus operandi that hackers tend to employ.”