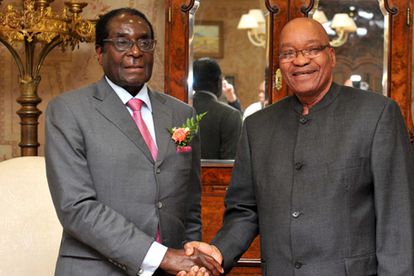 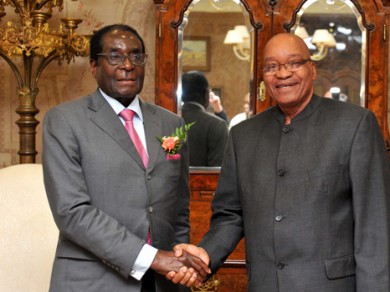 Zimbabwe’s president Robert Mugabe has reportedly planned to have his South African counterpart Jacob Zuma killed by a Lebanese murder squad, along with top diplomat Lindiwe Zulu, according to a document seen by The Guardian.

The newspaper said however, that it was not able verify the report as genuine, and it could also be a hoax.

The typed two-page document is dated 2 July 2013. It provides a lot of details, but at times its language is full of grammatical and spelling mistakes. The author is unknown.

Mugabe’s Zanu-PF party described the news as a “hogwash” and a “typical setup,” but the opposition Movement for Democratic Change (MDC) said this information should be taken seriously.

In a paragraph headed “Lebonese assasins” (sic) the report said, “On Monday this week Mugabe hired six Lebanese nationals to try and assassinate Lindiwe Zulu, who is Zuma’s advisor. The six met clandestinely with Mugabe yesterday to be briefed by him on the details of their mission … The six were told they must not concentrate on Zulu only, but should also pay attention to Zuma himself, and if they get a chance to do so they must assassinate him as well — but everything must appear as an accident.”

The report continues, “Mugabe promised the six Lebonese [sic] an undisclosed fortune in cash if they succeed in getting rid of the two who [sic] South Africa senior officials who are giving him a lot of trouble. Names of the six could not be established, but they entered into the country via Zambia in the last few days, where they had previously held a close meeting with [president] Michael Sata before travelling into Zimbabwe.”

Allegations come after Zimbabwe’s authorities fiercely criticised Zulu when she suggested it would be beneficial for the country to postpone the Zimbabwean elections by a month. Mugabe called her “some stupid, idiotic woman,” and said she should take care of South Africa’s issues.

Zanu-PF Rugare Gumbo commented, “To be frank with you, it’s all rubbish and hogwash to think a head of state like president Mugabe would set up something like that. We have a disagreement with Lindiwe Zulu but it would not go to that extent.”

Asked about the alleged threat to Zuma, he said, “You should not take it seriously. It’s a typical set-up in Zimbabwe to try and cause some confusion before the election because we are going ahead with our election according to our laws whether they like it or not.”

Douglas Mwonzora, the MDC’s spokesperson, said that the international community “must take these assassination allegations seriously,” but admitted that his party could not confirm the authenticity of the report.

Roy Bennett, the exiled MDC treasurer-general, was convinced the document was credible. “It comes from reliable and trustworthy sources within the heart of the CIO [Central Intelligence Organisation]. It is a stark reminder of the full horrific extent that Robert Mugabe is prepared to go in order to hang on to power and avenge his critics,” he said.

This is not the first time Zimbabwean government faces accusations of carrying out clandestine operations and assassinations.

South Africa’s Mail & Guardian newspaper recently published a list of nine Zimbabwean politicians who have died in mysterious car crashes over the years. Hebert Chitepo was killed in March 1975 by a car bomb in Lusaka. Solomon Mujuru  died reportedly in a fire, in 2011, but  the director of Zimbabwe’s forensic science laboratory, Birthwell Mutandiro, said in his report that there were indications that Mujuru had died before the fire spread to the room in which his body was found. The family did not get permission for exhumation and second postmortem examination.

Last month Edward Chindori-Chininga, the outspoken chairperson of a parliamentary committee that had just released a highly critical report on the diamond industry, also had a fatal car accident.

Baba Jukwa, an anonymous insider, regularly posts on his/her Facebook page information about plots planned by the Zimbabwean government. The blogger wrote that Chindori-Chininga was targeted before his accident.