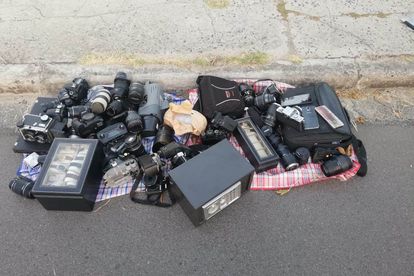 An alleged armed robber was shot dead and another wounded during a shoot-out with South African Police Service officers following a robbery at a business in Pinelands in Cape Town this week. Photo: SAPS

An alleged armed robber was shot dead and another wounded during a shoot-out with South African Police Service officers following a robbery at a business in Pinelands in Cape Town this week. Photo: SAPS

An alleged armed robber was shot dead and another wounded during a shoot-out with South African Police Service (SAPS) officers following a robbery at a business in Pinelands in Cape Town, the SAPS in the Western Cape said.

“Our efforts to ensure that we combat and investigate various crime generators in the province yielded good results [on Thursday] in Pinelands industrial area”.

SAPS flying squad officers acted on information provided after a business robbery and the vehicle used during the robbery was spotted in the area.

A high-speed chase ensued and a shoot-out between the suspects and the SAPS officers erupted.

The suspects jumped out of the moving vehicle and ran off in different directions to evade arrest. One suspect was fatally wounded and another wounded suspect was under police guard in hospital.

The vehicle was searched and officers seized of a 9mm Norinco Star firearm with several rounds of ammunition and items stolen during the robbery. The vehicle was reported hijacked in Milnerton last month.

Four suspects, aged between 31 and 50, were arrested and were expected to appear in the Cape Town Magistrates’ Court on Monday 24 February 2020 on charges of attempted murder, robbery, possession of an illegal firearm, and possession of presumed stolen property.

Police were hot on the heels of the fifth suspect who managed to escape the scene, Malo said.

In the Northern Cape, a convicted rapist has been sentenced in the Kimberley Regional Court this week to 30 years imprisonment, SAPS confirmed.

Charlie Hlenti, 23, was convicted of raping a 22-year-old woman at about midnight in June 2018 at Roodepan in Kimberley, Lieutenant colonel Dimakatso Mooi said in a statement.

The woman was walking alone when two men accosted her and took turns raping her before robbing her of a cellphone.

His bail application was successfully opposed and he was found guilty on February 14, 2020. He was subsequently sentenced to 30 years imprisonment for rape and five years for robbery, Mooi said.

Northern Cape police management welcomed the sentence and applauded Du Plessis for a job well done in ensuring that the perpetrator would serve jail time. The community was also thanked for their support in providing tip-offs to police.

They were further encouraged to continue reporting any form of criminal activities to the Crime Stop Line 086-00-10111 or the MySAPSApp, which could be downloaded on Google Store using any smartphone, Mooi said.