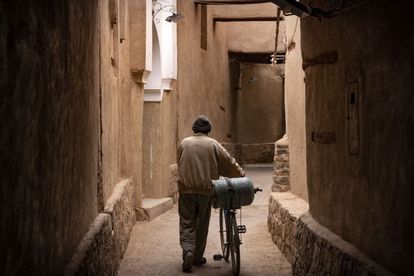 MOROCCO-ALGERIA-BORDER
A man walks with his bicycle in the oasis town of Figuig on the border with Algeria, on 20 March 2021.
FADEL SENNA / AFP

MOROCCO-ALGERIA-BORDER
A man walks with his bicycle in the oasis town of Figuig on the border with Algeria, on 20 March 2021.
FADEL SENNA / AFP

Algeria on Tuesday repatriated around 40 Moroccan migrants across a long-shuttered land border crossing opened exceptionally for the purpose, a Moroccan NGO said.

“The Algerian authorities handed around 40 migrants to their Moroccan counterparts via the Zouj Beghal land crossing, which was opened specifically,” said Hassan Amari, head of the Association for Helping Migrants in Difficulty.

He said the group had written to the Algerian authorities asking them to release seven detained Moroccans at the request of their families, but that “to our surprise, they repatriated 40 people”.

The Moroccan authorities sent buses to take the migrants home, he said.

The exceptional opening of the border, closed since a 1994 diplomatic crisis, comes amid a new round of tensions between the North African rivals.

Morocco’s King Mohammed VI in July called for the two nations’ land borders to be reopened.

But Algeria in August cut off diplomatic ties with Algeria in protest at what it said were “hostile actions”, charges the kingdom denied.

Morocco’s long northern coast, some parts of which are visible from mainland Spain, has long been used by migrants from Morocco and beyond as a launchpad for bids to reach Europe by sea.

But “some end up in Algeria after their boats get lost, and they are arrested,” Amari said.