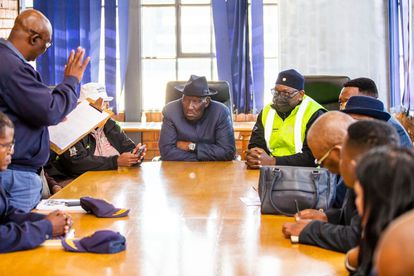 The shootings in Alexandra came as a shock as they happened sporadically in five different parts of Alexandra last week. PHOTO: Twitter/@David_Makhura

The shootings in Alexandra came as a shock as they happened sporadically in five different parts of Alexandra last week. PHOTO: Twitter/@David_Makhura

Twelve men allegedly behind the mass shootings and murders in Alexandra last week were in court on Monday.

The group of men face a range of criminal charges for the terror that happened in the Johannesburg township last week.

“They face two counts of murder, four counts of attempted murder, possession of stolen property, robbery with aggravating circumstances, and possession of an unlicenced firearm and ammunition.”

ATTACKS AND GUNFIRE IN ALEX

Violence erupted in Alexandra last Thursday when people were shot and robbed of their belongings. Items like cellphones, cash and shoes were stolen as the attacks erupted in five different locations in the area.

Two people succumbed to the gunshot wounds. Some are still in hospital, Mjonondwane said.

“All accused are remanded in custody until 25 July, for them to get legal representation and for bail investigations,” she said.

But according to police, five people were fatally shot and five were injured. It is alleged that four armed men robbed and shot people in the area, spokesperson Captain Mavela Masondo said.

The suspects first met people travelling in a Toyota Etios on Fourth Avenue and Selborne Street and fired shots at them. One person was injured.

The second incident took place at Eleventh Avenue and Boulevard Street. Two people were sitting in a car, charging their cellphones due to loadshedding.

“The suspects robbed the victims of their cellphones before shooting them. Both victims were taken to medical care centres for treatment,” Masondo said.

The next victim was fatally shot in the same Boulevard Street. On Seventh Avenue, another was shot and died at the scene while two others were robbed of their cellphoones and shoes.

And on Sixth Avenue, the suspects met and shot three people. One person died while two were taken to hospital.

The gunmen came across the next victim at Boulevard Street, where he was fatally shot.

“It is reported that the last shooting happened at Sixth Avenue and Roosevelt Road where two people were shot while inside the Toyota Avanza. Both victims died at the scene,” Masondo said.