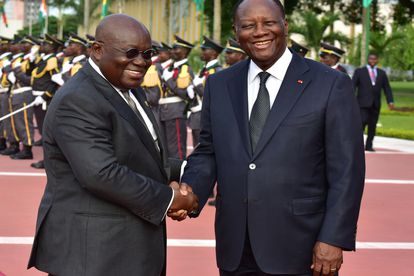 Ivory Coast’s President Alassane Ouattara (R) shakes hands with his Ghanaian counterpart Nana Akufo-Addo before their meeting at the presidential palace in Abidjan on 5 May, 2017. Photo: ISSOUF SANOGO / AFP

Ivory Coast’s President Alassane Ouattara (R) shakes hands with his Ghanaian counterpart Nana Akufo-Addo before their meeting at the presidential palace in Abidjan on 5 May, 2017. Photo: ISSOUF SANOGO / AFP

“The unsavoury politics of vaccine nationalism we’re witnessing could… potentially derail global efforts made (to contain) the pandemic to date,” Akufo-Addo said in a speech at the European Parliament.

“We, like the World Health Organization, are worried that the phenomenon of hoarding vaccines will worsen even further, as countries begin to administer booster shots.”

The Ghanaian leader said the vaccination rate in Africa was lagging at under 10 percent and that countries were still not able to get vaccines in the “requisite numbers”.

Richer nations, including EU members, the United States and Britain, are scrambling to administer booster doses after the discovery of the Omicron variant.

‘THE WORLD SHOULD BE GRATEFUL TO SA’

The Ghanaian leader also blasted “the decision taken by countries, including those in the EU, to single out African countries for the imposition of travel bans on a variant that has been discovered in over 40 countries”.

Several countries, along with the 27-nation European Union, have imposed travel curbs on countries, mainly in southern Africa, after Omicron was first detected in South Africa.

“The world should be grateful to the South African scientists whose knowledge and expertise in genomic sequencing, enabled them to identify the new variant,” Akufo-Addo said.

“Plaudits, not the condemnation of their peoples, should have been their portion.”