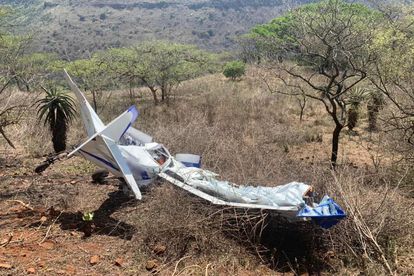 Two people have died in a light aircraft crash at Hilton, neat Pietermaritzburg in KwaZulua-Natal, on Saturday afternoon.

The deceased are the pilot and passenger, both described as elderly males, and were declared dead on the scene by Netcare 911 paramedics. Their names have not yet been released.

According to reports, the Bushbaby light sports aircraft took off from Eva’s field, an airstrip in Hilton, and was on its way to Umkomaas on the KZN south coast. It crashed in a rugged bush area shortly after leaving Hilton.

Ledwaba said the authority’s Accident and Incident Investigation Division had dispatched investigators to start the process of gathering information that would assist in establishing the cause of the fatal aircraft accident.

“The evidence collection phase, which has already begun, will continue on site and will define the size and scope of the investigation, as well as the anticipated timeframe for the completion of a final accident investigation report,” he noted in a media statement.

While the full report could take a year or longer to complete, depending on the complexities of the incident, the CAA will issue a preliminary report within 30 days.

Bushbaby is an SA-produced kit aircraft

The Bushbaby is a South African-produced light aircraft from Kitplanes for Africa, which is based on the East Rand. Various versions have been produced since the 1990s.

According to the local aviation website AvCom.co.za, it South Africa’s most successful kit aircraft.

In August, a light plane crash near Springs, east of Johannesburg, killed on person and badly injured another. The aircraft was apparently on a training flight when the incident occurred.