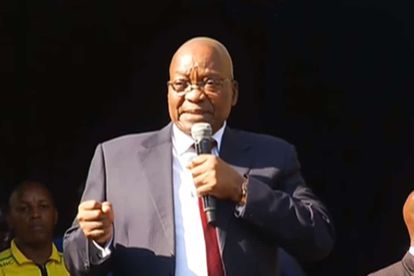 Former president Jacob Zuma made some scathing remarks about the corruption case levelled against him by the National Prosecuting Authority (NPA).

After both parties — the State and Zuma’s defence — submitted their arguments on the permanent stay of prosecution, the Pietermaritzburg High Court reserved its judgment, stating that the judges require three months of deliberation before they rule on Zuma’s application.

The former president’s position is that the infamous arms deal case he has been linked to for about a decade has dragged on for too long.

The NPA has maintained that Zuma played a central role in the corruption of the military procurement programme.

In a whirlwind of attempts to pursue graft charges against the president (they were dropped in 2016 and later reinstated), Zuma has been critical of the fact that the NPA may be acting under political influence.

In his address to loyal supporters of his battalion, he indulged in the criticism once again.

From the hysteria around Angelo Agrippa — or is it Agrizzi? — to his early warnings about the Zondo commission, Zuma went rogue on that stage.

These are some of the things he mentioned with a bit of context.

“Some of you will regret it”

This is the first time we heard Zuma publicly addressing the influencers in his decision to launch the Zondo commission.

He told supporters that some of the officials that have been implicated in state capture were warned of this eventuality well before it became the threat that it is today.

He teased at the idea that so far, the same commission he launched has failed, after many attempts, to tie him to state capture.

Describing the state capture inquiry’s most important witness as a “big and fat white guy”, Zuma also had some things to say about Agrizzi.

The former Bosasa COO has, coincidently, linked Zuma with a string of corrupt deals his company made with the government.

The former president pretended as if he had no idea who Agrizzi was, to the crowd’s bizarre pleasure.

He went on to ridicule Agrizzi’s evidence and, once again, teased at the fact that until this day, he has not been implicated in any wrongdoing.

“He is in shiny suits while I am in jail”

As he concluded his address, Zuma made some subliminal comments about President Cyril Ramaphosa.

The president jokingly stated that life must be great for the incoming president.

While he was preparing for the inauguration in his shiny suits, he was lamenting in court, trying to avoid going to jail.

It was, by all intents and purposes, a subliminal jab at a Ramaphosa who, for the most part, does not appear to be available to assist him.

Zuma has previously admitted that he is struggling to pay his legal fees. The decision to halt the government’s funding of the former president’s bills was not contested by Ramaphosa’s interim team.

Before launching into his usual struggle medley package performance, Zuma warned that should the prosecution be granted, many startling revelations would be made.