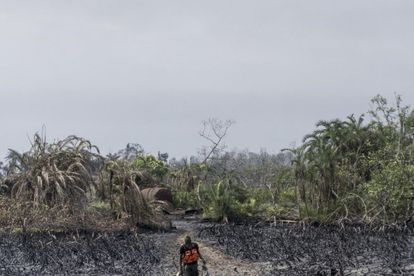 A member of NNS Pathfinder of the Nigerian Navy forces walks through a mangrove during a patrole looking for illegal oil refineries on 19 April 2017 in the Niger Delta region near the city of Port Harcourt. Photo: STEFAN HEUNIS / AFP

A member of NNS Pathfinder of the Nigerian Navy forces walks through a mangrove during a patrole looking for illegal oil refineries on 19 April 2017 in the Niger Delta region near the city of Port Harcourt. Photo: STEFAN HEUNIS / AFP

Gunmen killed two Nigerian contractors working for a local subsidiary of Italy’s ENI and a security officer in an attack in Nigeria’s oil-producing Niger Delta region, a security official and the company said on Monday.

Nigeria struggled with violence in its Niger Delta until a 2009 amnesty deal with militants mostly stopped attacks on oil installations and kidnappings.

But violence still occurs and pirates and criminal gangs operate in the region, targeting ships offshore for kidnapping raids on their crews.

“Our officers were ambushed and attacked by some unknown pirates while on lawful protection of some Agip Oil workers in Okoroma,” he said.

In a statement, ENI said the contractors were working on a mangrove restoration project with their security detail when they were attacked by an armed group. It said three people were killed and two injured.

The project was to restore mangroves damaged by illegal refineries and spills from sabotage to oil installations in the area, it said.

During the height of the Niger Delta violence, militant groups demanded that a greater share of oil revenues stay in the southern region, where the bulk of Nigeria’s oil is produced.

Thousands of former rebel fighters were enrolled in the government amnesty after they turned in weapons in 2009 in exchange for training and salaries for ex-militants and infrastructure deals for the region.

Attacks have since occasionally flared up and in the past failure to make amnesty payments has stoked tensions with former militants.

Piracy and Delta unrest is just one battle facing Nigeria’s security forces, which are also fighting a 12-year Islamist insurgency in the northeast and criminal kidnap gangs in the northwest.