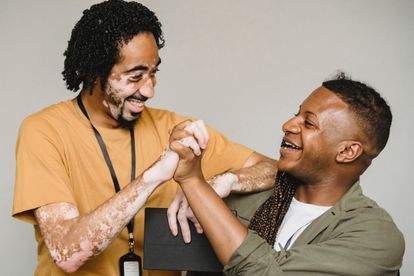 Although vitiligo is a non-contagious disease and does not often lead to severe physical illness, it can cause significant psychological disturbance in the affected person. Photo: PEXELS

Although vitiligo is a non-contagious disease and does not often lead to severe physical illness, it can cause significant psychological disturbance in the affected person. Photo: PEXELS

Vitiligo – a disease which causes pale patches to develop on the skin and mucous membranes – can be psychologically devastating. The change in skin colour may even create doubts about a person’s identity, as seen in the case of a Nigerian whose bank asked him to register his national identity number again. Vitiligo causes loss of skin pigment (colour) either in patches or over much of the body. Dermatologist Umar Abdullahi has seen how upsetting and stigmatising the condition can be, particularly for dark skinned individuals.

How common is vitiligo and who gets it?

Vitiligo is the commonest skin pigmentation disorder. It affects 0.1%-2% of most populations worldwide. The prevalence of vitiligo in Nigeria ranges from 2.8% to 6.6% across different parts of the country. The highest prevalence of 6.6% is in Ibadan, southwestern Nigeria.

It usually begins in childhood or adolescence, with peak onset at 10 to 30 years. It may, however, occur at any age. Both sexes are affected equally and there are no racial differences in the rate of occurrence.

Vitiligo is not contagious. No one can get it via physical contact, sexual activity, or sharing utensils with a person who has the condition.

Normally, there is a pigment called melanin in the skin. It’s produced by cells called melanocytes. The melanin pigment is responsible for the colour of skin, eyes and hair. Vitiligo occurs when the melanocytes die or stop producing melanin. The exact cause of the melanocytes destruction is unknown. But it may be related to a disorder of the immune system (an autoimmune disease). This means that cells within the body are destroying the melanocytes.

People with vitiligo have a higher risk of developing other associated autoimmune diseases such as adrenal insufficiency, pernicious anaemia, diabetes mellitus and thyroid disorders.

Various precipitating factors have been suggested for vitiligo. These include physical trauma to the skin, sunburn, psychological stress, inflammation, pregnancy, use of contraceptives, vitamin deficiency, and many others. But no specific environmental triggers have been proven.

Vitiligo is a progressive disease which is often difficult to treat. Responses to treatment may be slow and outcomes disappointing. But there are treatment options available. They include topical and systemic medications, light therapy (phototherapy) and surgical interventions. The major aim of treatment is to halt progression, prevent complications such as sunburn and ensure re-pigmentation of the white patches.

The choice of treatment depends on the age of the affected person, extent of skin involvement, body part affected, progression of the disease, and how it’s affecting the quality of life.

It is also important to address the psychological impact of the disease.

Although vitiligo is a non-contagious disease and does not often lead to severe physical illness, it can cause significant psychological disturbance in the affected person. Many people with the disease suffer from shame, embarrassment, low self-esteem, and social withdrawal.

Vitiligo lesions – the patches of pale skin – appear more obvious in individuals with darker skin because of the greater contrast. Thus vitiligo patients with normally dark skin can suffer more distress. Studies done in Nigeria to evaluate the quality of life in vitiligo subjects indicate that the condition has a significant impact.

My own study showed that the impact on quality of life was associated with age, sex, socioeconomic status, disease activity, family history of vitiligo, duration of the disease and educational attainment.

I found that women experienced a greater impact on their quality of life than men. This may be attributed to women’s feelings about their appearance and their self esteem. Younger people, especially those in the age group 28-37 years old, also tended to experience a poorer quality of life. They faced peer pressure, perceived lack of respect, occupational struggles, and challenging social or emotional relationships.

Vitiligo patients in higher income groups tended to have a worse quality of life impairment than others. This was because they tended to be more conscious of their health and appearance since they had the financial capacity to afford quality healthcare and fashionable clothing.

The more educated a vitiligo patient was, the worse the quality of life. They may have had higher expectations of treatment outcome.

A person living with vitiligo often faces social stigma and discrimination from their immediate family members, employers and the community at large.

Social beliefs can worsen the situation of vitiligo patients, especially women. For example some people believe vitiligo is “God’s punishment” for their sins. Beliefs like this can lead to personal suffering and broken relationships.

Coping with stigma and discrimination

Vitiligo should be seen like every other chronic disease, for example hypertension or diabetes, with no discrimination. People who are affected by it must be supported and accommodated by their family and community.

Early identification by patients and family members of signs of depression is vital. These signs may include hopelessness, suicidal thoughts, losing interest, sadness and self-accusation.

Measures to alleviate depression and anxiety in both children and adults with vitiligo include psychotherapy, medications and proactive management.

People can improve their self-esteem by joining support groups such as MyVitiligoTeam and Vitiligosociety. These groups bring together people with vitiligo and their loved ones to share experiences, encouragement and support.

Governments should enact policies and laws against discrimination and stigmatisation for chronic illnesses, including vitiligo. Affected individuals should not be discriminated against at work or in society at large. They should be supported both socially and financially.