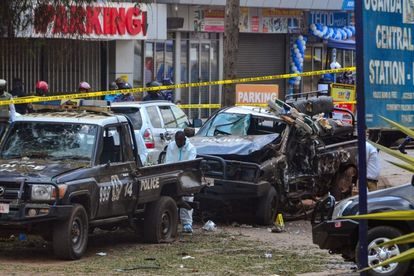 Ugandan police, in a security crackdown following deadly suicide bombings, said Tuesday they had arrested four Somalis for bringing a suspected explosive device into a resort due to host President Yoweri Museveni this week.

A week after twin bombings killed four in the capital Kampala, police spokesman Fred Enanga said a detonator was discovered during a routine vehicle search at the nearby resort of Speke Munyonyo.

UGANDA ANTI-TERRORISM SECURITY MADE AN ARREST

“We now have the duty to trace… the main component of the suspected explosive device,” he said.

The popular hotel, which has welcomed heads of state in previous years, is due to host a ministerial meeting on Thursday chaired by Museveni.

Police have tightened security in recent weeks after Uganda suffered a series of deadly attacks, including last week’s suicide bombings in Kampala claimed by the Islamic State (IS) group.

The attacks occurred within minutes of each other, with two suicide bombers on motorbikes disguised as “boda boda” motorcycle taxi drivers detonating a device near parliament, while a third attacker targeted a checkpoint near the central police station.

Police last month arrested a number of alleged Allied Democratic Forces (ADF) operatives and warned that extremists were believed to be plotting a new attack on “major installations.”

The arrests followed a bus explosion near Kampala that wounded many people and a bombing at a roadside eatery in the capital that killed one woman.

The ADF, historically a Ugandan rebel group, has been accused of killing thousands of civilians in eastern DRC.

In 2019, the IS began to claim some ADF attacks on social media, presenting the group as its regional branch – the Islamic State Central Africa Province, or ISCAP.

In March the United States formally linked the ADF to IS.