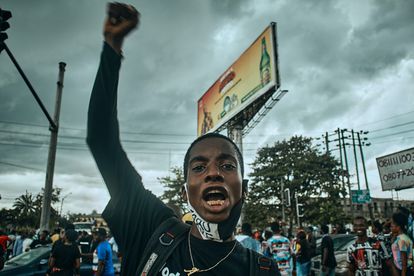 A Man Shouting in the Rally. Photo: PEXELS / Emmanuel Ikwuegbu

A Man Shouting in the Rally. Photo: PEXELS / Emmanuel Ikwuegbu

Hundreds of people in Nigeria’s northwestern city of Sokoto demonstrated Saturday over the arrest of two students following the murder of a Christian student accused of blasphemy, residents said.

Africa’s most populous country is roughly divided between Muslims and Christians but religious tensions and deadly clashes are not uncommon, particularly in the north.

Deborah Samuel, a student of Shehu Shagari College of Education was on Thursday stoned to death and her body burnt by a mob of Muslim students of the college after she posted something on social media they deemed insulted the Prophet Muhammad.

ALSO READ: On This Day: What happened on 15 May?

Police said they made two arrests following the incident and that they had begun a manhunt for other suspects who appeared in footage of the gruesome murder which circulated on social media.

In the early morning of Saturday, Muslim youths took to the streets of the city, lighting bonfires and demanding the release of the two detained suspects despite the earlier deployment of policemen to maintain order, residents said.

Some of the protesters besieged the palace of the Muhammad Sa’ad Abubakar, the Sultan of Sokoto and the highest spiritual figure among Muslims in Nigeria who condemned the killing and demanded those involved face justice.

“It was more of a riot by a mob of young men and women who were demanding the release of the two people arrested over the killing of the Christian student,”

“The crowd which made bonfires on the streets were also demanding the police stop the manhunt for those identified to have taken part in the killing,” said Arkilla who witnessed the protests.

A large number of protesters besieged the palace of Abubakar chanting “Allahu Akbar” or God is Great, said resident Bube Ando who lives near the palace.

“Some among the security men deployed to protect the palace tried to ask the protesters to leave but they became unruly,”

“Policemen and soldiers who stood outside the palace hurled teargas canisters and fired into the air and succeeded in dispersing the crowd,” he said, without giving details about whether anyone was hurt.

The irate mob retreated downtown where they attempted to loot shops belonging to Christian residents but were dispersed by security patrol teams, said another resident Faruk Danhili.

“Following the sad incident that happened at the Shehu Shagari College of Education on Thursday and sequel to the developments within (Sokoto) metropolis this morning till afternoon… I hereby declare, with immediate effect, a curfew… for the next 24 hours,”

he said in a statement.

“Everyone should, please, in the interest of peace go back home.”

“No person has the right to take the law in his or her own hands in this country. Violence has and never will solve any problem,” Buhari said in a statement on Friday.

ALSO READ: ‘My body my choice’: Thousands rally across US for abortion rights