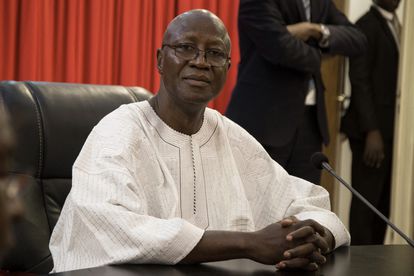 In view of “the letter of resignation of December 8,” the president decrees that “the duties of Prime Minister Christophe Joseph Marie Dabire are terminated,” the government’s secretary-general Stephane Wenceslas Sanou said, reading out the decree on public television.

However, the outgoing government will be required to remain in a caretaker capacity until a new one is formed, Sanou said.

Kabore first appointed Dabire in early 2019 as part of a reshuffle coinciding with a rising wave of jihadist attacks in the impoverished country.

He was reappointed in January 2021, after the president was re-elected for his second and last term.

Dabire was previously Burkina Faso’s representative at the eight-nation West African Economic and Monetary Union (UEMOA) and in the 1990s served as minister to former president Blaise Compaore, partly at a time when Kabore himself was premier.

Dabire’s portfolios were for health, followed by secondary and higher education, and then scientific research.

Jihadist attacks have grown increasingly regular and deadly in Burkina Faso since 2015, killing 2 000 people and displacing 1.4 million from their homes, especially in the north and east.

In mid-November, at least 57 people, 53 of them gendarmes, were killed in an attack on a police post in the country’s north.

The premier’s resignation comes after the president last month stressed the need for a “stronger” cabinet on the eve of anti-government protests over the jihadist violence.

A week later, he pledged to root out corruption from the country.