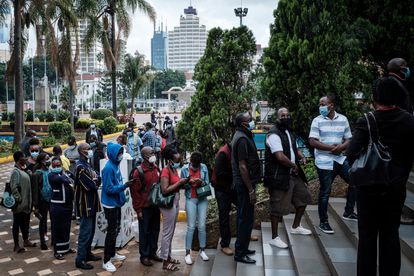 People wait to register for the first injection of the Oxford/AstraZeneca Covid-19 vaccine during the launch of the vaccination campaign for 5000 frontline workers in the tourism and hospitality sector in Nairobi county at the Kenyatta International Convention Centre (KICC) in Nairobi, Kenya, on 21 April, 2021. Photo:Yasuyoshi CHIBA / AFP

People wait to register for the first injection of the Oxford/AstraZeneca Covid-19 vaccine during the launch of the vaccination campaign for 5000 frontline workers in the tourism and hospitality sector in Nairobi county at the Kenyatta International Convention Centre (KICC) in Nairobi, Kenya, on 21 April, 2021. Photo:Yasuyoshi CHIBA / AFP

“We have detected the Omicron variant among passengers in airports,” said Mutahi Kagwe, without specifying when and where the variant was first identified.

Kagwe said those hospitalised with Covid-19 in Kenya were still suffering from the Delta variant of the disease, but cases of Omicron were expected to quickly rise.

“It is just a matter of time before Omicron becomes the dominant variant,” he told reporters in Mombasa.

The East African country has seen a surge in Covid infections in recent days after a lull lasting several months.

On Tuesday, the health ministry said the number of tests returning positive results stood at 11.5 percent – a roughly ten-fold rise on a week earlier.

Kagwe ruled out taking “knee-jack reactions” in response to the Omicron detection, saying any measures taken would be based on science.

“From where we sit, variants will come and variants will go…the decisions we make as a government in order to protect our people must also be measured and calculated,” he said.

IT WAS A MATTER OF TIME

The WHO warned Tuesday that the variant was spreading at an unprecedented rate and urged countries to act swiftly to rein in transmission and protect their health systems.

Since the new, heavily-mutated variant was first detected in southern Africa last month, it has been reported in 77 countries, according to the WHO.

Early data suggests it can be resistant to vaccines and is more transmissible than the Delta variant, which was first identified in India and accounts for the bulk of the world’s coronavirus cases.

Kenya has fully vaccinated only 3.27 million people, or 12 percent of the adult population, according to official figures.

The government hoped to vaccinate 10 million people by Christmas, and 27 million by the end of 2022.

This week, the High Court in Nairobi struck down a government order to prevent unvaccinated Kenyans from accessing services and entering public places such as national parks, bars and restaurants.