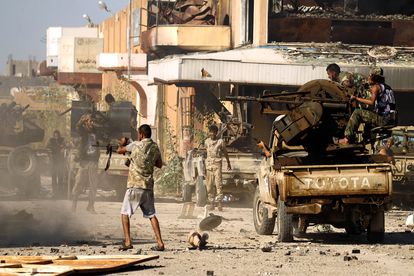 “After consulting the technical, judicial and security reports, we inform you of the impossibility of holding the elections on the date of December 24, 2021 provided for by the electoral law,” the chairman of the committee wrote Wednesday to the head of parliament.

The letter did not put forward a new date.

The vote was intended to mark a fresh start for war-torn Libya a year after a landmark ceasefire and more than a decade after its 2011 revolt that toppled and killed dictator Moamer Kadhafi.

But speculation had been mounting for weeks that the poll would not take place on time, given bitter disputes over its legal basis, the powers of any resulting president and the candidacies of several deeply divisive figures.

The High National Electoral Commission (HNEC) had not published a finalised list of candidates and analysts had suggested no side wanted to take responsibility for the election being cancelled.

The vote, intended to go hand-in-hand with parliamentary elections, was part of a United Nations-led peace process overshadowed by corruption allegations and the resignation of special envoy Jan Kubis just weeks before the elections.

The vote was also mired by rancorous divisions over whether controversial figures should be allowed to stand.

Seif al-Islam Kadhafi, a son of Moamer, and eastern military chief Khalifa Haftar were both in the running despite accusations of war crimes.

Interim Prime Minister Abdulhamid Dbeibah’s candidacy also sparked controversy as he had pledged not to run as part of his original leadership bid.

Analysts have warned that violence could easily flare again surrounding the elections.