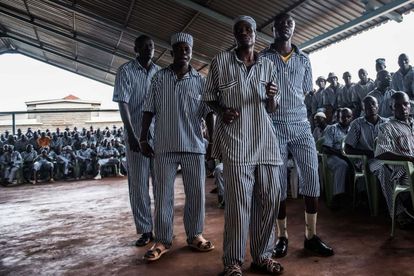 Kenya has launched a nationwide manhunt after three “dangerous” inmates escaped from a high-security prison, with the authorities vowing to punish those responsible for the jailbreak.

Interior Minister Fred Matiangi said preliminary investigations were still underway but that seven wardens at Kamiti Maximum Security Prison had been arrested in connection with the jailbreak on the outskirts of Nairobi.

No explanation has been offered into how Mohamed Ali Abikar, Joseph Juma Odhiambo and Musharaf Abdalla Akhulunga managed to escape the heavily-guarded facility on Monday.

All three have been charged with terrorism-related offences and one, Abikar, was serving 41 for involvement in an attack that left 148 people dead.

Matiangi said exit points along the country’s border had been placed on high alert with fears the trio could try to slip out of Kenya undetected.

“We are going to conduct a massive manhunt for these three. They are dangerous criminals and we have to get them. And we are going to get them,” Matiangi said late Monday after visiting Kamiti with the country’s top law enforcement officials.

KENYA PRISON BREAK DUE TO ‘RECKLESSNESS’ AND ‘IRRESPONSIBILITY’

Matiangi blamed “recklessness” and “irresponsibility” for the prison break and said there were conflicting accounts about what occurred.

“We have gone to the place where the escape allegedly happened, and we have formed certain opinions. We don’t want to discuss that” while formal investigations are still underway, he said.

The government would protect any whistleblowers wanting to come forward and volunteer information, Matiangi added.

The Directorate of Criminal Investigations has offered a reward of 60 million Kenyan shillings ($535 000) to anyone with information that might lead to the capture of the escapees.

Abikar was found guilty in 2019 of being a member of Al-Shabaab and abetting the Somali jihadist group in the slaughter of 148 people at Garissa University in eastern Kenya in April 2015.

The victims, mostly students, were rounded up at dawn by gunmen and shot point-blank.

It was the second bloodiest terror attack in Kenya’s history, surpassed only by Al-Qaeda’s bombing of the US embassy in Nairobi in 1998 that killed 213 people.

Odhiambo, meanwhile, was arrested in 2019 for trying to enlist in Al-Shabaab while Akhulunga was detained in 2012 over a foiled attack on Kenya’s parliament, police said.