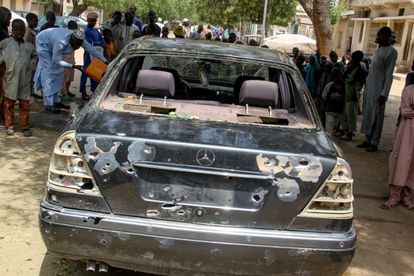 The wreckage of a car hit by an attack led by Boko Haram members is seen surrounded by residents of the Adam Kolo district of Maiduguri on 24 February 2021. Photo: Stringer / AFP

The wreckage of a car hit by an attack led by Boko Haram members is seen surrounded by residents of the Adam Kolo district of Maiduguri on 24 February 2021. Photo: Stringer / AFP

Suspected jihadists fired two rockets at the northeast Nigerian city of Maiduguri on Saturday, hitting two homes near the airport, injuring one, the army and residents said.

The rockets, fired from an unknown location at 5:00 GMT, fell on houses in a residential area near the Gomari Airport neighbourhood, which is close to a Nigerian Air Force base, two residents told AFP by telephone.

“I was inside when I heard the first explosion and I instinctively looked out the door to see what was happening,” said resident Idris Muhammad.

“Shortly after a second rocket flew over my house before hitting the second house at Gomari,” he said.

“No one was hurt in both houses as the rockets fell on vacant parts of the houses.”

NO LIVES LOST TO ROCKETS

Kyari Ali, who lives in a street where a house was hit by the second rocket in the Gomari Airport neighbourhood, said it destroyed a section of the building.

“Luckily, there was no one in the affected part when the rocket landed,” said Ali who visited the property.

The army said in a statement on Saturday afternoon that it had responded to a “security breach” by “suspected Boko Haram (BH) and Islamic State of West Africa Province (ISWAP) terrorists.”

“The sound of explosions… in Maiduguri was heard in the early hours of today with shots fired into these communities,” army spokesman Onyema Nwachukwu said.

“This unfortunate incident has caused some level of damage and apprehension.

“Although, no life was lost, sadly a minor sustained injury,” Nwachukwu added.

Ground troops with aerial support “successfully neutralised the threats and infiltration attempt by the terrorists,” he added.

Residents said they suspected the attack was carried out by ISWAP which has consolidated its influence since the death in May of Boko Haram’s leader Abubakar Shekau.

The early morning attack happened a day after seven soldiers were killed by ISWAP jihadists near a base at Rann, close to the Cameroonian border.

In February, at least 17 people were killed and 43 others injured when ISWAP fighters fired multiple rockets on the city.

Jihadists have also blown up electricity towers on several occasions, plunging the city into darkness for months.

On 23 February 2019, a soldier was killed and 20 others wounded when Boko Haram launched 13 rocket attacks on Maiduguri hours before voting began in Nigeria’s presidential election.

Over 40 000 people have been killed since the insurgency began 12 years ago and more than two million are displaced from their homes.