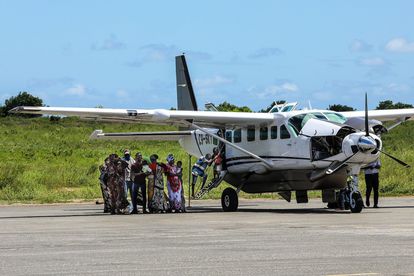 Arrival of internally displaced people from Palma at Pemba airport, Mozambique, 09 April 2021. The violence unleashed more than three years ago in Cabo Delgado province escalated to new levels about a fortnight ago, when armed groups first attacked the village of Palma, which is about six kilometres from the multi-million dollar natural gas projects. EPA-EFE/JOAO RELVAS

Arrival of internally displaced people from Palma at Pemba airport, Mozambique, 09 April 2021. The violence unleashed more than three years ago in Cabo Delgado province escalated to new levels about a fortnight ago, when armed groups first attacked the village of Palma, which is about six kilometres from the multi-million dollar natural gas projects. EPA-EFE/JOAO RELVAS

The Rwandan army late last month let journalists interview some of the fighters that it had captured since launching operations in the troubled region last July.

Linked to the so-called Islamic State, the extremist group has rampaged across towns and villages in northern Mozambique since 2017 with the goal of establishing a hardline caliphate.

It is known locally as Al Shabab, although it has no link to the group with a similar name in Somalia.

The militants never feared Mozambican soldiers, the detained fighter, who appeared in his twenties said.

But since Rwandan defence forces deployed in the country six months ago, they have “started to get afraid and have become very weak.”

“They’ve actually lost their power,” he told reporters at a Rwandan base in Cabo Delgado province a few days after being captured, his hair cut short and wearing a floral tan-and-red shirt.

They “now run away as soon as they hear the first Rwandan gunshot.”

He said their commanders had instructed them “not to attack” the Rwandans.

Behind him, an assortment of seized equipment including rocket-propelled grenades, rifles and mobile handsets lay on a canvas sheet.

Mohamed and other jihadists were being held by Rwandan forces, but were soon to be handed over to Mozambican authorities.

After the jihadists last year attacked the northern port city of Palma, killing dozens, Rwanda in July deployed around 1,000 troops to the wider province.

Fellow detained militant Madi Muhamed Sadi agreed that the jihadists were struggling to retaliate against “the new army.”

All they “do now is run” whenever their positions are raided, said Sadi, a Tanzanian in a navy-blue linen shirt.

It was unclear when Sadi joined the rebels, but he said most of the group’s leaders were Tanzanian.

“There was also one Mozambican, then three white guys, two of whom died before I arrived,” he said.

“There are also some Arabs… They speak Swahili.”

President Filipe Nyusi has said the region has suffered fewer attacks since the deployment of more than 3,100 foreign troops last year – a number that includes contingents from Rwanda and southern African countries as well as support from European and the United States.

Multiple sources have told AFP that Rwanda’s troops seem to be the most effective contingent, and the one that is deployed most frequently in combat operations.

The nearly five-year-old insurgency has killed more than 3,700 people and driven more than 800,000 from their homes.

The fighting has also forced global energy giant TotalEnergies to suspend a multi-billion-dollar natural gas operation in Afungi, near Palma.

Despite the apparent progress, sporadic attacks against civilians are still reported in the northern coastal province, the latest killing four people last weekend.

The violence is also shifting inland into neighbouring Niassa province.

Sadi said the jihadists remained determined to continue their quest, despite the setbacks.

Another captured fighter, Aby Bakhar Selim, said he was forced to join the extremists after they raided his village of Macomia and beheaded his father, before capturing him, his brother and younger sister.

“They raped her and now she’s heavily pregnant,” the young Mozambican said of his sister.

While he says he is a member of the group, he says he opposes the way his fellow fighters abuse women and children.

“It really hurts me. Women and children are dying there for no reason,” he said.

The jihadists have abducted more than 600 women and children over the past three years, Human Rights Watch said late last year.

The group force young women and girls to “marry” their fighters “who enslave and sexually abuse them” while some have been sold off to foreign militants for between $600 and $1,800, it said.

At the Rwandan base after managing to escape the group, Elise Joaki, a woman with neatly plaited hair who appeared in her late twenties, recounted her horrific ordeal after being abducted.

“As a woman, you spend the first whole month being raped to prepare you to belong to one man they will choose for you,” she said.

And if “you refuse to sleep with him, he will beat you”.

“If you remove your veil and are unlucky to be seen by a man, he will beat you,” she added.