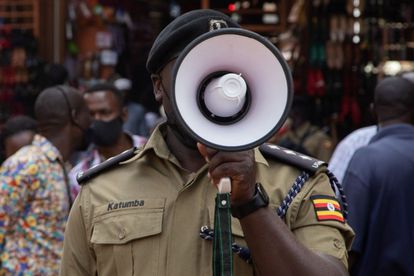 An Ugandan Police officer speaks through a loudspeaker to sensitize people on how to be vigilant to report any suspicious material to police at a bus terminal in Kampala, Uganda, on 26 October 2021, after recent two bombing incidents. Photo: KATUMBA BADRU SULTAN / AFP

An Ugandan Police officer speaks through a loudspeaker to sensitize people on how to be vigilant to report any suspicious material to police at a bus terminal in Kampala, Uganda, on 26 October 2021, after recent two bombing incidents. Photo: KATUMBA BADRU SULTAN / AFP

A suicide bomber from a group linked to the Islamic State (IS) triggered Monday’s bloody bus explosion near the Ugandan capital Kampala, police said Tuesday, adding extremists were suspected of plotting a major new attack.

The attack that wounded several people appears connected to another bombing on Saturday in Kampala that killed one person, police added.

Monday’s blast in Lungala was a “suicide bomb attack, where the attacker died in the explosion,” police spokesman Fred Enanga said.

The 23-year-old assailant who wore a suicide vest and belt was “on the wanted list of members” of the Allied Democratic Forces (ADF), he added.

The ADF, historically a Ugandan rebel group, has been accused of killing thousands of civilians in eastern Democratic Republic of Congo (DRC). In March the United States officially linked the ADF to the Islamic State group.

Enanga said police had established “a high connectivity” between Monday’s attack and a bombing at a roadside eatery in Kampala on Saturday evening that killed a 20-year-old woman and injured 3 others.

“There are individuals or groups of individuals preparing these IEDs who (belong to) the same group of attackers,” Enanga said, referring to improvised explosive devices.

Enanga said police had arrested a number of ADF operatives in the country, who were suspected of hatching “a plot to carry out a major incident on major installations”.

“We strongly believe the attackers are part of the sleeper cells in the country, inspired by ADF in close collaboration with the Islamic State,” Enanga said in a statement following a press conference.

Police were also pursuing a man believed to be the bomber’s accomplice, he added.

Survivors described scenes of chaos and panic following the explosion, with passengers screaming and trying to jump off the bus even before it had ground to a halt.

“As I ran out of the bus, I saw the lifeless body of a man slumped on a seat with blood all over him,” he said, adding that he counted at least 4 people who appeared to have been wounded.

Uganda’s President Yoweri Museveni tweeted Tuesday that the suicide bomber was part of the same group responsible for a foiled attack on the state funeral in August of army commander Paul Lokech.

Lokech, who was nicknamed the “Lion of Mogadishu”, had led a major African Union offensive against Al-Shabaab militants in Somalia.

“We shall get all of them. The present shallow effort is easy to defeat,” Museveni said on Twitter.

Enanga said all the attacks were planned by Meddie Nkalubo, a Ugandan ADF leader known by the alias “The Punisher”, who has been living in hiding in the DRC for several years.

The ADF is considered by experts to be the bloodiest of more than 120 armed groups that roam eastern DRC, many of them a legacy of two regional wars a quarter-century ago.

The DRC’s Catholic Church says the ADF has killed around 6 000 civilians since 2013, while a respected monitor, the Kivu Security Tracker (KST), blames it for more than 1 200 deaths in the Beni area alone since 2017.

On 11 March, the US State Department said the ADF were linked to the Islamic State under the name of “ISIS-DRC” or “Madina at Tauheed Wau Mujahedeen.” It named the group’s leader as Seka Musa Baluku.

Police called Saturday’s attack an “act of domestic terror” and the Islamic State later claimed responsibility for that bombing.

The police said Saturday’s blast was caused by an explosive device containing nails and pieces of metal, covered by a plastic bag.

They said the crude bomb left underneath a table indicated the work of an unsophisticated local outfit, and played down any connection to foreign networks.