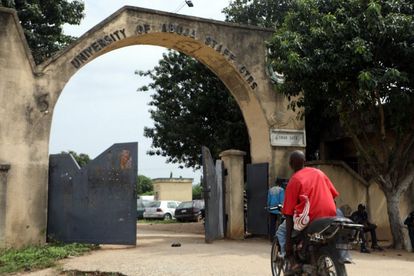 A general view of University of Abuja Staff Quarters’ gate where unknown gunmen kidnapped people amongst whom were 2 of the university professors, lecturers and their family members in Abuja, Nigeria on 2 November 2021. Photo: Kola Sulaimon / AFP

A general view of University of Abuja Staff Quarters’ gate where unknown gunmen kidnapped people amongst whom were 2 of the university professors, lecturers and their family members in Abuja, Nigeria on 2 November 2021. Photo: Kola Sulaimon / AFP

The dawn attack at the staff quarters of University of Abuja in Giri raised fears of safety around the Nnamdi Azikiwe International Airport, some 20 kilometres (12 miles) away.

“Six persons were allegedly abducted into the forest by the criminals on sighting the security operatives,” police spokeswoman Josephine Adeh said in a statement, adding that the gunmen have not been identified.

Armed men known locally as bandits have increasingly targeted schools and universities in recent months in Africa’s most populous nation of some 210 million inhabitants.

The university said on its Facebook page that four staff and their children were abducted.

A senior lecturer who requested anonymity said the bandits “came at about 2:00 am (1:00 GMT) in large numbers, operated for about two hours before the police arrived.”

He told AFP that staff had expressed worries about a lack of adequate security around the university, saying it was a “porous environment… surrounded by mountains.”

READ: 12 million children ‘afraid’ to go to school in Nigeria

Adeh said police was dispatched to the area to “fortify security, improve public safety and protect citizens in and around the university community.”

Efforts are underway to rescue the victims, she added.

Gunmen in northwest and central Nigeria have kidnapped more than 1 000 students since December, according to the UN.

Most of the victims have been released after negotiations with their captors.

Last month, President Muhammadu Buhari said that even when abducted students are released, “the trauma of the incidences remain long in their minds.”

The retired general elected in 2015 said that 12 million children in Nigeria were currently scared of going to school.