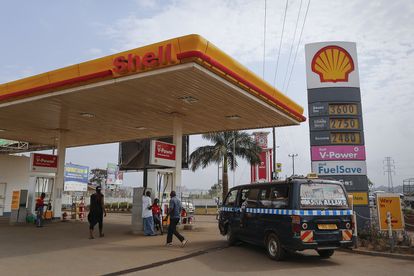 7 A photograph made available on 22 February 2016 shows a Shell fuel station in Kampala, Uganda, 20 February 2016. The crisis has led to panic-buying and skyrocketing prices at the petrol pump. EPA/DAI KUROKAWA

7 A photograph made available on 22 February 2016 shows a Shell fuel station in Kampala, Uganda, 20 February 2016. The crisis has led to panic-buying and skyrocketing prices at the petrol pump. EPA/DAI KUROKAWA

The fuel crisis has led to panic-buying and skyrocketing prices at the petrol pump, with one minister warning traders not to take advantage of the shortages to “cheat” Ugandans.

Kenyan media reports spoke of traffic snarl-ups snaking as much as 70 kilometres (40 miles) from its border with Uganda because of the delays caused by the coronavirus testing.

“The (Ugandan) ministry of health has immediately and temporarily suspended mandatory testing at the two border points to ease movement of trucks into and within the country,” ministry official Charles Olaro told AFP.

He said the move was also aimed at averting a “potential super-spreader” event at the border with so many drivers caught in the logjam.

In some parts of the country, petrol stations had run out of fuel while at others, petrol was selling for 12,000 shillings ($3.40, three euros), a threefold increase.

The border delays first began in late December when truckers staged protests at a Covid testing fee imposed by Uganda. The fee was later scrapped but the backlogs persisted because of what drivers say was the slow rate of testing and customs clearances.

“The suspension of mandatory testing was long overdue. It was a recipe for disaster because of congestion of trucks at the borders, a situation that has seen the fuel prices hit all-time highs,” Juma Sentongo, a member of the Uganda Long Distance Truck Drivers Association, told AFP.

“As of this morning, we have seen many trucks leaving the border points and heading into Uganda with cargo and hopefully we will see fuel prices coming down in next 24 hours.”

Truck driver Alex Mwerinde added: “The congestion at the borders is slowly easing but the heavy traffic will take longer than expected to clear because customs clearance (as well as) Covid-19 testing has been also problematic.

“Until the trucks have cleared out of the borders, is when Ugandans should expect a drop in fuel prices and this is not going to take one day,” the 41-year-old told AFP.

In Kampala and other towns, many motorists were rushing to fill their tanks fearing further shortages, causing traffic jams in the capital.

Some were stocking up using jerrycans, defying a ban on their use under anti-terrorism measures introduced after a spate of deadly bombings last year.

Ugandans were also reporting hikes in taxi and bus fares in many parts of the country.

Energy Minister Ruth Nankabirwa said Monday the border delays were caused by a faulty scanner used by custom officials to check incoming cargo vehicles as well as “issues regarding Covid-19”.

“I call on the dealers not to use this chance to cheat Ugandans,” she said.

The East African country of some 45 million people remains under some restrictions because of the pandemic although schools opened last week for the first time in nearly two years.

It has recorded 158,676 cases of Covid-19 including 3,424 deaths, according to latest government figures issued on January 15.