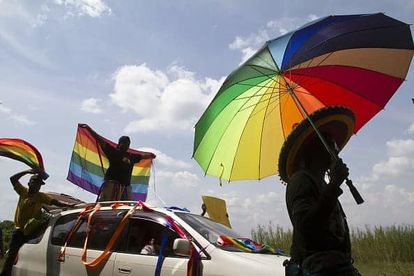 A person holds an umbrella bearing the colors of the rainbow flag as others wave flags during the the gay pride rally, Photo: AFP

A person holds an umbrella bearing the colors of the rainbow flag as others wave flags during the the gay pride rally, Photo: AFP

Under existing law in the West African country, homosexuality is already punishable by up to five years in jail.

Eleven MPs initiated the draft law including at least one belonging to the ruling party, asserting that they had the support of highly influential religious groups.

Homosexuality is widely considered deviant in Senegal, which is 95 percent Muslim.

In a statement, the Office of the National Assembly – which assesses the merits of incoming bills – said the current penal code already punishes homosexuality “severely”.

It also noted that the authorities including President Macky Sall oppose the decriminalisation of homosexuality.

THE BILL WOULD HAVE INCREASED  JAIL TIME TO 10 YEARS

The bill that was thrown out on Wednesday would have increased possible jail time to between five and 10 years and treble the maximum fine.

Mamadou Lamine Diallo, the lawmaker who spearheaded the bill, said it was inspired by the umbrella group And Samm Jikko, whose name means “together for the safeguard of values” in Senegal’s main Wolof language.