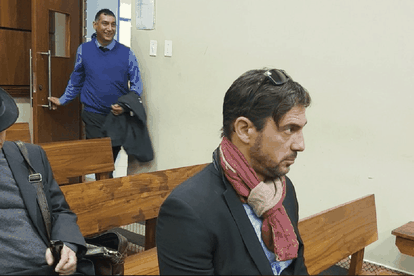 It was a “blink-and-you’ll-miss-it” appearance in the Randburg Magistrates Court for Adam Catzavelos, who appeared publicly for the first time since his infamous K-word video went viral last August. After almost 10 months in hiding, the man who drew the ire of all right-minded South Africans surfaced to come and face the music.

With longer hair and the loss of the darkly-iconic straw hat, Catzavelos was almost unrecognisable from his face in the video. For the uninitiated, he recorded himself bragging about the lack of “k*****s” on a beach while holidaying in Greece, only for the footage to be made public.

As soon as proceedings got underway, they were done for the day. But what happens now, and how will the case continue? We’re rounding up the answers in quickfire fashion:

Adam Catvavelos in court – what happens next?

What he’s been charged with

Adam Catzavelos has been officially charged with crimen injuria. Both the EFF and the SA Human Rights Commission had filed complaints, with the SAHRC submitting their affidavits to the court on Tuesday morning. It’s likely the defendant will face a hefty fine, but the prospect of jail time looks increasingly slim.

Why proceedings were postponed

Catzavelos has not yet been able to find a lawyer to represent his case. He turned up at court on Tuesday with no legal representation, but the court has given him the best part of two weeks to find an advocate willing to fight his cause. The state will have to appoint a lawyer for him if he’s unsuccessful.

When do we return to court?

Once Adam Catzavelos is fully lawyered-up, one way or another, we’ll get back underway on Thursday 13 June.

What Adam Catzavelos has told the media

We’ve actually heard him break his silence during the brief appearance in court. Although, there’s not really much to go on. He told the assorted media that he wouldn’t be talking about the incident “until the matter has been finalised”. However, he gave a bit more away to SABC, telling them that “he had certainly felt better” than he did on Tuesday:

The case against #AdamCatzavelos who has been charged with Crimen Injuria has been postponed to 13 June. Catzavelos appeared before the Randburg Magistrate's Court this morning. #sabcnews

How Adam Catzavelos will defend himself

Obviously, his actions were indefensible. There’s no denying that Catzavelos said the K-word maliciously, regardless of the context. So it comes down to mitigating circumstances. He has already apologised for his actions and shown a degree of remorse – something that may work in his favour next month:

“I have watched my video and I feel total shame. It is hard to put into words what I want to say and genuinely apologise. I don’t expect people to forgive me, but will spend the rest of my life repenting and trying to make up for my total lack of respect and judgment.”