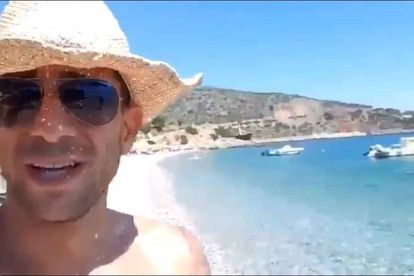 The family of racist holidaymaker Adam Catzavelos say they have been subjected to some death threats, The Sunday Times reports.

Catzavelos’ rather casual use of the K-word sparked outrage after a video of him at a beach believed to be in Greece surfaced on social media.

According to the publication, his older brother Nic says their father has since received a death threat.

“This week while I was at my dad’s house the telephone rang. When dad answered the person on the other end said he was coming to kill him,” he said.

“We are terrified, I have never been afraid to live in my country before,” he continued.

“Now, when I walk to my mother’s house 800 metres away from my home, I look over my shoulder. We are living in fear.”

Following the video Nic describes as “obscenely racist”, Adam was dismissed by St George’s Fine Foods, the family business founded by their father, and had his shares put in a family trust.

Several other businesses with links to the Catzavelos’ business have since publically cut ties with them.

As part of the backlash from the video, the Johannesburg private school which Adam’s children attend has barred him from its premises.

Big ups to St John’s College for taking a stance against Adam whilst protecting the interests of the kids.

Adam is a persona non grata at the College pic.twitter.com/j26HKmFtI5

Nic says they have had to place their parents in a safe place:

“We fear for our kids when they have to return to school, although staff have been supportive.”

Adam Catzavelos has since offered an apology for his actions;

‘Unfortunate video’= fcuk I was caught

‘I alone made these foolish comments’ = I made the racist remarks

No where in this statement does he say his comments were racist! pic.twitter.com/wqS1ts4Rhm