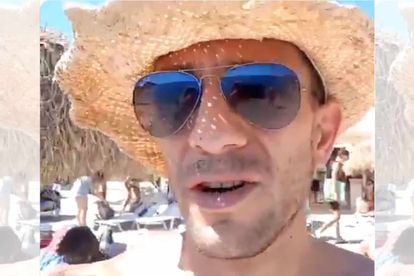 He became one of the most notorious names in modern South African history. Now, Adam Catzavelos is set to return to the shores of Mzansi to face the music at a court hearing next week.

Catzavelos shot to the highest echelons of infamy when he recorded himself in Greece, celebrating the lack of black people on a beach he was visiting. However, the businessman didn’t just make an abhorrent point on its own – his use of the K-word was brash and disgusting.

“Let me give you a weather forecast here. Blue skies, beautiful day, amazing sea and not one k***** in sight. Fucking heaven on Earth. You cannot beat this.”

Initially sent as a private video, it wasn’t long before the clip had been uploaded to social media. His trial-by-Twitter began, and it was not long before Adam Catzavelos saw his life crumble in front of him. He was fired from his family business, banned from his kids’ school, and forced to stay in exile with the Greek side of his family.

However, after 10 months of keeping a low profile in Europe, Catzavelos is coming home. We’ve got all the details ahead of what is sure to be red-hot court hearing next week.

Adam Catzavelos in court – what you need to know

Where the case will be heard

It’s understood that he will be taken to Randburg Magistrate’s Court in Johannesburg. This location is no stranger to cases that bring intense media attention, as it has hosted Duduzane Zuma’s culpable homicide trial.

What date will it be?

If you want to follow these proceedings, put Tuesday 28 May in your diaries.

The charges Adam Catzavelos will face

After the video went viral last August, the EFF laid charges of crimen injuria against the much-maligned figure. The DA also raised a complaint with the SA Human Rights Commission, as Youth Leader Luyolo Mphithi said this vitriol was “not only an insult but also a criminal offence”.

Does he have any possible defence?

Obviously, his actions were indefensible. There’s no denying that Catzavelos said the K-word maliciously, regardless of the context. So it comes down to mitigating circumstances. The best he could do next Tuesday is apologise whole-heartedly for his actions and show unrelenting remorse – as he did shortly after the video went public:

“I have watched my video and I feel total shame. It is hard to put into words what I want to say and genuinely apologise. I don’t expect people to forgive me, but will spend the rest of my life repenting and trying to make up for my total lack of respect and judgment.”

What punishments or sentences could he face?

Well, crimen injuria can land you with two years in jail if it’s an extreme case. Think of Vicki Momberg, for example.

LegalBrief have previously listed Adam’s apology as a mitigating factor in his behaviour, too. But unlike those before him who now live in infamy – such as your Mombergs and your Sparrows – it seems his regret could soften the blow, as the aforementioned convicted racists failed to express suitable remorse for their actions.

Jail time is unlikely, and when he returns to South Africa, It’s probable that the Randburg Magistrate’s Court will fine Catzavelos, as they did with Sparrow. There could be further punishment from the Human Rights Commission too, as they decide on an appropriate way to handle this case.