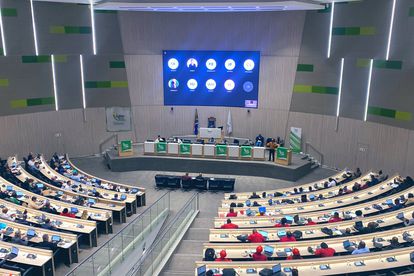 ActionSA and the ANC got to withdrawn what ANC calls a “corrupt” deal from Council agenda. PHOTO: Twitter/@tshwane_mayor

ActionSA and the ANC got to withdrawn what ANC calls a “corrupt” deal from Council agenda. PHOTO: Twitter/@tshwane_mayor

ActionSA and ANC are victorious in fighting to withdraw an ‘unsolicited’ bid worth billions. This deal was proposed in Council by DA mayor Randall Williams on Thursday.

The City of Tshwane’s special Council meeting on Tuesday saw ActionSA and the ANC oppose a report by Williams worth R26 billion.

The report is to request for public consultation to be conducted for an energy service provider. The plan is to refurbish, finance, operate and maintain the Pretoria West and Rooiwal Power Stations.

According to Williams, this proposal is a solution that could reduce loadshedding.

The proposal sought to repurpose the City’s coal power plants which haven’t been in use since 2014. This is by converting them to use gas and to generate over 800MW of power over the long-term.

ACTIONSA AND ANC SAY THE PROPOSAL IS UNLAWFUL

According to ActionSA, this is an unsolicited bid. There is no indication of which of the four legal requirements this proposal meets in terms of the Municipal Finance Management Act (MFMA).

The party, which is part of the multiparty coalition led by Democratic Alliance’s (DA) Williams, complained about the proposal. Their argument is that the process has inappropriate levels of involvement in Williams’ political office, said ActionSA Gauteng chairperson Bongani Baloyi.

“It is unclear if the service provider has a NERSA-approved licence to produce electricity as it appears that the proposal assumes that the City’s licence will be used.”

The party further believes that no engagements have taken place with the National Energy Regulator of South Africa (NERSA) or Eskom regarding this power deal.

The ANC in Tshwane also rejected the proposal in council and called it completely corrupt for the same reasons.

A recording which circulated of Williams speaking in a meeting on this proposal indicated political interference, the party said.

“This is explicit corruption and interference by the Executive Mayor and the DA-led coalition government,” ANC caucus spokesperson Joel Kgomotso Masilela.

ActionSA wrote to the multiparty coalition on Sunday evening. This was to request a confirmation that the item proposed by Williams be removed from the Council agenda.

“Appreciating the withdrawal of this report, ActionSA will return to the multiparty coalition structures to charter a path that brings the residents reliable energy supply without compromising our ethics and commitment to good governance in the process.

The ANC has rejected the report and has further referred the Mayor for investigation.

“The ANC Tshwane Caucus is vindicated. DA-led coalition government corruption is visible for everyone to see. We will be submitting a motion of no confidence against Executive Mayor Randall Williams,” said ANC caucus spokesperson Joel Kgomotso Masilela.