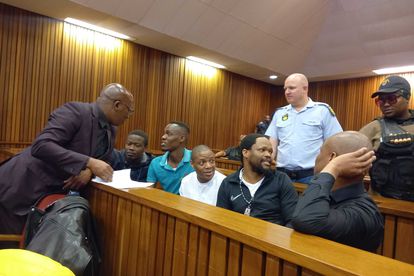 from left to right; the interpreter and the five men accused of murdering Senzo Meyiwa (Bongani Ntanzi is the one wearing the blue T-shirt). Image: Nokwanda Ncwane/The South African.

from left to right; the interpreter and the five men accused of murdering Senzo Meyiwa (Bongani Ntanzi is the one wearing the blue T-shirt). Image: Nokwanda Ncwane/The South African.

The bail application of accused 2 in the trial of the five men accused for the murder of soccer star, Senzo Meyiwa, Bongani Sandiso Ntanzi has been postponed to 13 October 2022.

Ntanzi was set to make a bail application at the North Gauteng High Court where the Senzo Meyiwa murder trial sits on Thursday, 22 September 2022.

On Thursday, 15 September State witness and Meyiwa’s close friend Tumelo Madlala pointed out Ntanzi as one of the alleged intruders Meyiwa had pinned against the wall in the Vosloorus house where the late goalkeeper was shot on 26 October 2014 during an alleged robbery.

WHY WAS THE APPLICATION POSTPONED?

Defence counsel for accused 1 – 4, Timothy Thobane told The South African that the State only filed their heads of argument on Tuesday, 20 September around 17:00 and also find amended heads of arguments.

“The court decided that the matter must be moved because this is a complex matter and the court needs to go through all the documents before the matter sits,” he said.

We have gathered some information and this is what we know about accused 2:

The other accused are Muzikawukhulelwa Sibiya, Mthobisi Prince Mncube, Mthokoziseni Maphisa and Sifisokuhle Nkani Ntuli. They face charges of premeditated murder, attempted murder, robbery with aggravated circumstances, possession of firearms without a licence and possession of ammunition. All the five men pleaded not guilty.