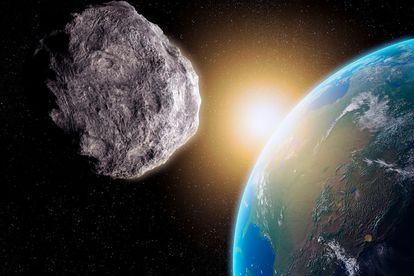 A potentially hazardous asteroid named 2015 FF will be zipping past Earth TODAY at 33 000 kilometres per hour (km/h) TODAY.

ASTEROID 2015 FF IS ROUGHLY THE SIZE OF A BLUE WHALE

The giant asteroid is expected to come within 4.3 million km of Earth and has an estimated diameter of between 13 and 28 metres. Adding to its size, it will also be speeding past Earth at 33 012 km/hour, as per HT Tech.

While you may be scratching your head and wondering “what the big deal is,” especially since it’s only 4.3 million kilometres away, it’s important to note that NASA defines any space object that comes within 193 million km of Earth as a “near-Earth object” and any fast-moving object within 7.5 million km as “potentially hazardous.”

ANOTHER THREE WILL PASS EARTH THIS WEEKEND

Near-Earth-Objects (NEO) zip past Earth all the time. In fact, another three will pass by our region of the universe over the weekend.

Nasa said it monitors more than 29 000 NEOs that pass within 48 million kilometres of Earth’s orbit. Out of those, only 15 000 are classed as Apollo-classed asteroids.

An Apollo-class asteroid orbits our Sun and could potentially, at some point in its trajectory, intercept Earth’s orbit.

ALSO READ: How to spot the 2022 Perseid meteor shower that will peak on Saturday

Between now and 29 August, nine other asteroids of similar absolute magnitudes will be passing by Earth, none of which really poses a threat until it somehow changes course.

WHAT IS HAPPENING IN THE NEXT WEEK:

ALSO READ: How to see the last SUPERMOON of the year moon TONIGHT

Al-Ahli: How many coaches have Pitso’s new team had since 2018?