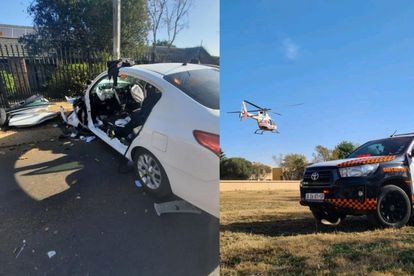 A nine-year-old girl had to be airlifted in order to access urgent medical assistance after an accident involving a taxi earlier today, Friday, 19 August.

HELICOPTER ACTIVATED TO AIRLIFT A NINE-YEAR-OLD

Emer-G-Med paramedics responded to the scene of the collision involving a light motor vehicle and minibus taxi on Cliff Avenue in Waterkloof, Pretoria, earlier this afternoon.

“On arrival on scene fourteen people were found to be injured.”

An on-scene triage area was established by incident commanders and additional resources were called to the scene by the Emer-G-Med Emergency Operations Centre.

“On closer inspection of the light motor vehicle, two adults and a twelve year old female were treated for serious injuries and taken by ambulances to nearby hospitals for further care,” Emer-G-Med reported.

They also discovered that a nine-year-old girl was found to be in a critical condition and was treated and stabilized on the scene by Emer-G-Med Emergency Care Practitioners before being airlifted with the assistance of the Netcare911 aeromedical helicopter to a specialist facility for the definitive care that she required.

According to Emer-G-Med, 10 commuters from the taxi suffered minor injuries only.

Remaining in Pretoria, on Thursday night Emer-G-Med paramedics responded to the scene of a collision involving a light motor vehicle and a motorcycle on Boeing Street in the Elardus Park area (Pretoria East).

Reports from the scene are that a male motorcyclist was found to have sustained critical injuries and was treated and stabilized on scene before being taken to a nearby hospital for further care.