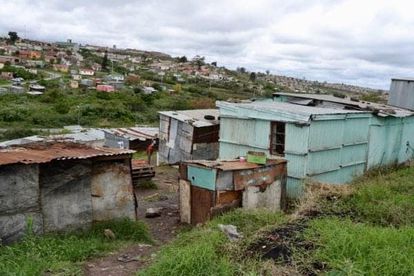 Residents of Barcelona Informal Settlement in Mdantsane, East London, say they are too scared of criminals to go and relieve themselves in the bush at night. Instead, they use buckets in their shacks, then throw out the excrement in the morning.

Barcelona was established in 1992. There are no toilets. There are two standpipe taps for the residents of 32 shacks. Electricity is through illegal connections. The shacks are close to one another with only small passages between them. The shacks flood when it rains.

Community members say that for years they have been begging the municipality and ward 14 councillor Zininzi Mtyingizane to build them toilets.

When GroundUp visited there was the stench of urine and excrement. A 48-year-old woman, who identified herself only as Marhadebe, said she was one of the first to build a shack here. She has three rooms and lives with her four children and one grandchild. Outside her shack was a bucket with human waste in it.

She said she was having stomach problems that day and the bush was too far away from her shack to go and relieve herself.

“Using a bucket is better than going to those bushes alone because anything can happen. We are not safe. I cannot risk being raped by nyaope [drug- taking] boys. I’d rather use my bucket.”

Marhadebe said the municipality had promised them flush toilets in 2013.

Siyolise Maleki, a community leader since 2011, said residents had raised the matter of toilets with municipal officials numerous times. At one stage toilet materials had been stored at the ward councillor’s office. That was in June 2013. But nothing had happened.

“This June we were hoping to get the toilets, but the material is no longer at the ward councillor’s office and there’s no proper explanation,” she said.

GroundUp made repeated attempts to get comment from Buffalo City Metro Municipality and the ward councillor, without success.