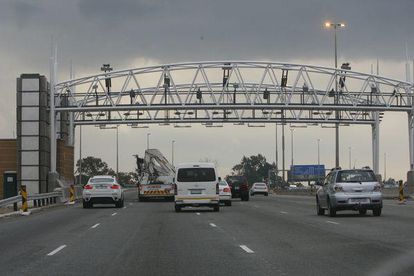 The latest Government Gazette from April has revealed new amendments to the National Road Traffic Regulations by the Department of Transport. With toll roads still being a contentious issue across the country, Transport Minister Blade Nzimande has looked to make the best of a tricky situation.

With roughly 36 toll roads across the country, there is a high chance you will pass through one of these at some point over the next 12 months or so.

“It is a comprehensive amendment that covers numerous topics. Draft regulations on microdots, the fitment and control of microdot fitment centres, regulations on the exemption of abnormal vehicles and procedures for cancelling learner’s and driving licences obtained contrary to the provisions of the legislation, are among the amendments that have been published for comment,” said the department.

Focussing specifically on toll roads, the department explained that the changes to tariffs have come into effect since 12 April 2018.

Sanral also emphasised that these changes are simply part of the yearly adjustments.

“Adjustments to the tariffs are influenced by the CPI over the preceding twelve months and the increase in VAT from 14% to 15% recently announced in the 2018/19 Budget.

“The adjustments are made on an annual basis to keep the toll tariffs aligned with inflation. The one percentage point VAT increase is added to the base toll tariff and contributed to the upward adjustment that became operational on April 1.”

Before you go through the updated pricing list, be sure that you know what category your vehicle falls into. 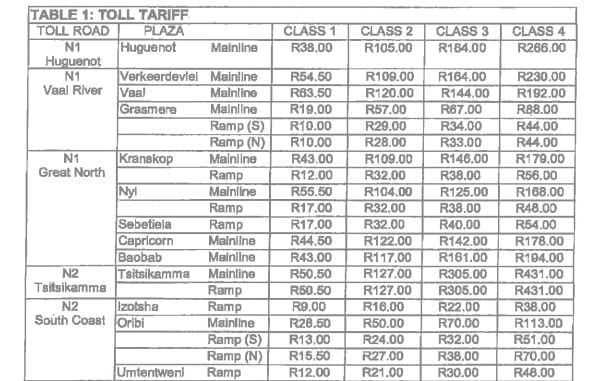 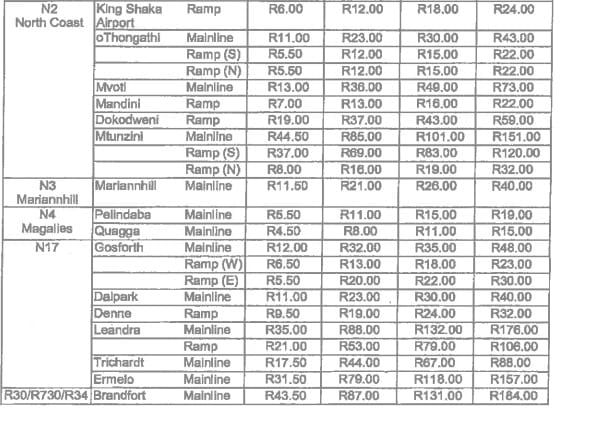 If the road you’re looking for isn’t listed in this part of the Gazette, be sure to check our own list of toll roads with pricing from the previous year.

Read: Toll roads in South Africa: Where are they, and what do they cost?

If you were looking for a long distance toll-free journey, we’ve got you sorted with those routes too.