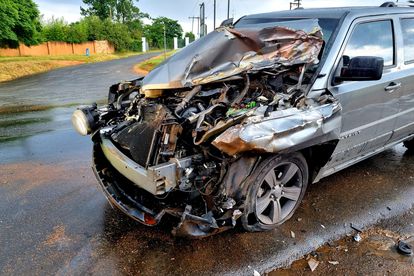 An 18 month old baby was among those injured in the T-bone fashion car crash Photo: Emer-G-Med

An 18 month old baby was among those injured in the T-bone fashion car crash Photo: Emer-G-Med

An eighteen month old baby was among those injured in a car crash in Randburg on Wednesday.

“Reports from the scene are that two light motor vehicles collided in a T-bone fashion, with three people suffering injuries.”

In another incident Emer-G-Med paramedics responded to Beyers Naude drive and corner of Garden world for an accident.

“Reports from the scene are that one person suffered moderate injuries and was treated and stabilized on scene before being taken to a nearby hospital for further care.”

Earlier this morning one man was killed and another was in critical condition after a vehicle flew off the N1 on Wednesday morning.

ONE DEAD IN CRASH

Emer-G-Med spokesperson Kyle van Reenen said just before 6am on Wednesday, Emer-G-Med paramedics responded to the scene of a serious motor vehicle collision on the Van Rynveld Avenue at the N1 Bridge.

“Reports from the scene are that a light delivery vehicle careened off the N1, overturning and landing on its roof on the roadway below.”

Van Reenen said upon closer inspection found the passenger to have sustained fatal injuries and was declared dead on arrival of paramedics.

“The driver was found in a critical condition and several advanced life support interventions were needed to stabilize him before he was taken by ambulance to a nearby hospital for further care.”

In other news, an 11-year-old girl was killed when a vehicle crashed into her on 28 February at around 18:50.

Police spokesperson Captain Andre Beetge said at around 18:50, a 39-year-old driver of a Red Toyota Tazz was driving on the Rocklands Road on his way to Kariega, when he collided with the 11-year-old girl, Maria Makwena.

According to the driver, he noticed children walking on the pavement on his approach.

Beetge said he also alleged that he decreased his speed and when he was close to them, two children suddenly ran across the road, but one of them turned back again and the accident took place.