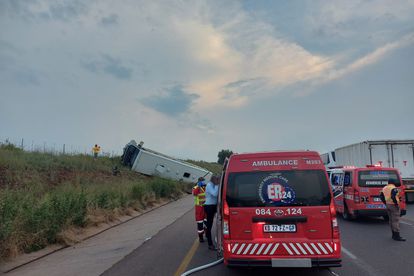 The bus that rolled over in Centurion.
Photo: Facebook/ER24

The bus that rolled over in Centurion.
Photo: Facebook/ER24

Seventeen people have been injured after a bus allegedly lost control on the N14 near the Eeufees Road offramp in Centurion.

The bus allegedly crossed both the centre median and the oncoming two lanes, shooting up an embankment and rolling on its side.

BUS ROLLS OVER IN CENTURION

ER24 said their paramedics arrived on the scene along with multiple emergency services around 17:28 to find all the injured passengers lying on the roadside below the bus.

“ER24 treated a seriously injured 33-year-old female with Advanced Life Support interventions as well as a moderately injured 44-year-old female. Both were transported to hospital for further care.

“Two other people were found to have suffered serious injuries and the remaining 13 luckily escaped with only minor injuries. They were treated and transported to hospital by other services on the scene.”

The South African Police Services (SAPS), Tshwane Metro Police (TMPD) as well as the Fire Department were reportedly all on scene for further investigation.

SEVERAL HOSPITALISED AFTER COLLISION IN ROODEPOORT

“Fortunately, no serious injuries or fatalities were found.

“The patients were treated for their injuries and four were later transported to a nearby hospital for further treatment. The details surrounding the incident are unknown.”