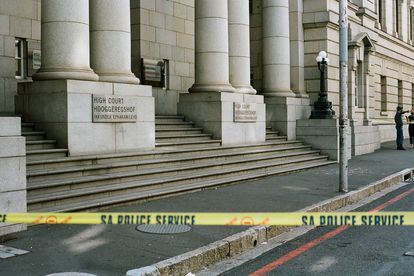 Zandile Mafe, the man accused of burning parliament, returned to the Cape Town Magistrate’s Court on Thursday, 12 May. The State told the court that it needed more time to finalise its reports.

At Mafe’s last Magistrate’s Court appearance, on 25 March, State Advocate Mervyn Menigo said the prosecution would likely have a draft indictment and summary of facts ready by the next appearance.

Six weeks later, Menigo asked for yet another postponement. He said a final damage report on the parliamentary buildings would be ready by 20 May and that a crime scene and arson report would be finalised imminently.

The final damage report is expected to be delivered to a parliament portfolio committee on 20 May.

On Friday, 1 April, the Coega Development Corporation presented the findings of its initial report to the Joint Standing Committee on Financial Management.

“He requested the court to postpone the case to 9 June 2022, promising that all outstanding reports will be ready as well as the authorisation certificate which is required when an accused is charged with terrorism,” said NPA spokesperson Eric Ntabazalila.

Menigo also told the court that Mafe would be served with an indictment and the case would be transferred to the Western Cape High Court at the next appearance.

The presiding officer, Magistrate Ronel Oliver, ruled in favour of the State, saying that granting the nearly-month-long postponement is in the interest of justice.

Magistrate Oliver asked that the indictment be ready to be served by 9 June. The accused needs to be served before he can plead to the charges he faces.

He has been charged with housebreaking with intent to commit terrorism and arson, arson, terrorism and theft in connection with the fire that gutted the parliamentary precinct on 2 January.

Mafe’s defence appealed the denial of his bail application on 25 April. The Western Cape High Court is yet to deliver its judgement in that matter.

When he next appears in court Mafe will have been in prison for a little over five months.