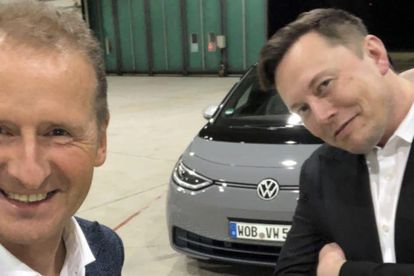 Volkswagen CEO Herbert Diess this week used his Twitter debut to troll rival chief executive Elon Musk who has a monstrous following – 42,841,289 as of Saturday, Jan.23 – to be precise.

Diess’ VW and Musk’s Tesla are rivals in the electric vehicles market, but have had a mostly cordial relationship in public.

Cyberspace, however, appears to have tweeted up a quite different proposition judging by Diess’ first Twitter tease.

“I’m here to make an impact with @VWGroup, especially on political issues,” wrote Diess on Wednesday.

“And, of course, to get some of your market shares, @elonmusk – after all, our ID.3 and e-tron have won the first markets in Europe. Looking forward to productive discussions!”

Back in Mzansi, VW again proved its popularity this week, posting a record passenger car market share and further cementing its brand claim to being “the peoples’ car.”

In September, Musk met with Volkswagen executives in Germany, where he test drove one of the company’s electric vehicles.

At the time, a Volkswagen executive said the German company planned to make between 900,000 and 1.5 million electric vehicles a year.

a Volkswagen spokesperson told CNN Business Thursday that the two CEOs “have a good relationship and respect each other.”

The VW CEO has to considerably speed up to catch up with Musk’s astronomical 42 million Twitter followers, as many as NASA, and has fired-off over 13k tweets placing him among the social media platform’s top accounts.

Diess’s Twitter account was created in December 2020, and seemingly taking time to rev up, as his first post only went up this Wednesday. By Friday morning, he had attracted about 16,000 followers.

The Tesla chief, the world’s richest man last time we checked, closed out 2020 with a series of tweets that included a sort-of poem: “Destiny, destiny / No escaping / that for me.”