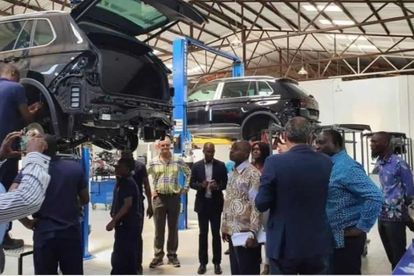 Ghana has become Volkswagen’s fifth assembly location in sub-Saharan Africa after the German automotive giant opened its first production facility there on Monday.

Both President of Ghana, Nana Addo Dankwa Akufo-Addo, and Minister of Trade and Industry, Alan Kyerematen, were on hand to welcome the first Volkswagen assembled in Ghana at the official launch of Volkswagen Ghana.

The event which was held in the capital and the location of the new facility in Accra, also saw announcements around Volkswagen’s overall investments into the country.

The latest development comes as a result of a concerted push into sub-Saharan markets by the carmaker – much of which was driven from Volkswagen South Africa’s Uitenhage, Nelson Mandela Bay base.

The event to announce Volkswagen’s investment and the unveiling of the first vehicle assembled in Ghana was attended by the President of the Republic of Ghana, His Excellency Nana Addo Dankwa Akufo-Addo, Minister of Trade and Industry Alan Kyerematen, and cabinet ministers.

The official opening of the vehicle assembly facility in the West African country, which has a population of about 30 million people, is the realisation of the Memorandum of Understanding (MoU) which Volkswagen signed with the government of Ghana in the presence of the German Chancellor, Angela Merkel, nearly two years ago.

The Government of Ghana has also fulfilled its MoU undertaking to develop a comprehensive Automotive Industry Policy with the recent promulgation of the Ghana Automotive Development Policy (GADP), which is a groundbreaking and blueprint automotive policy in the West African region.

GADP has paved the way for Volkswagen to solidify its commitment in Ghana with the initial investment in the first phase of its long-term vehicle assembly plans.

Universal Motors Limited, a licensed Volkswagen importer since 2005, has been awarded the assembly contract for the initial phase of the project.

The Universal Motors facility in Accra has an installed capacity to assemble 5 000 units per annum. The models to be assembled using Semi Knocked Down (SKD) assembly kits are Tiguan, Teramont, Passat, Polo and the Amarok.

“The opening of our vehicle assembly facility in Ghana is another exciting chapter of our expansion journey in the sub-Saharan Africa region. This is a big step into establishing our presence in the West African region.

“I wish to commend the Government of Ghana under the visionary leadership of His Excellency President Akufo-Addo, for introducing a comprehensive policy that is set to transform the automotive industry in West Africa.”

Schaefer added: “Volkswagen is committed to helping Ghana to develop a modern automotive industry as part of the country’s industrial transformation agenda.”

Schaefer also announced the establishment of Volkswagen Ghana, which is the first automotive company to be registered under GADP.

Volkswagen Ghana is a 100% subsidiary of Volkswagen. It is a registered assembler and will be responsible for the importation of the SKD kits and Fully Built Units (FBU). Jeffrey J Oppong Peprah has been appointed as the CEO of Volkswagen Ghana.

Volkswagen is strengthening the regions and focusing on new up-and-coming markets as part of its TRANSFORM 2025+ brand strategy.

The news out of Ghana comes hot on the heels of leadership changes within the African Association of Automotive Manufacturers (AAAM) – which was established to unlock economic potential and promote the automotive sector across the continent.

In a recent and surprise announcement, Schaefer has been appointed to head Volkswagen’s Skoda Auto brand in Europe where he will be driving the brand in its western and eastern European markets.

From his South African base, Schaefer, along with other prominent automotive leaders and stakeholders, had played a prominent role in developing new sub-Saharan markets.

THE IMPORTANCE OF AAAM

Also among AAAM’s key objectives is the development of a network of stakeholders committed to achieving the potential of the African automotive industry.

AAAM, established in November 2015, focuses on promoting growth in key regions with an alignment and understanding of what different countries could do best within the automotive industry.

Much of AAAM’s work involves engagements with respective governments towards unlocking economic potential and automotive investment and opportunities in those countries.

In its statement around the leadership changes, AAAM said Schaefer, who lead AAAM for the last three years, was passionate about Africa and developing a viable automotive industry.

“He addressed numerous global forums and conferences, whilst representing AAAM, including the African Union, about the potential of Africa for the automotive industry which starts with the necessary political will and is followed by the implementation of effective ecosystems and legislative policies.”

“Thomas was instrumental in driving the Pan African Auto Pact which focuses on the establishment of an African Automotive Development plan.

“Through a phased-in development, a pan African automotive sector will be established around assembly nodes in the South, West, East and North of Africa with a spread of value adding activities in neighbouring economies based on their comparative advantages.”

CHANGING OF THE GUARD

Whitfield, a former president of the National Association of Automobile Manufacturers of South Africa (Naamsa) joined Nissan in 1981 as a marketing trainee. He has since held various management positions in sales and marketing before he was appointed director of the heavy vehicle division in 1993.

In 2008, Whitfield was appointed as Nissan SA’s managing director.

During July 2019, Whitfield was appointed as chairman of Nissan Africa South, delivering his expertise to more than 50 African countries. He is currently based in Egypt as the managing director.

“Being president of AAAM will allow me to utilise my extensive experience in the motoring industry, as well as in my previous roles at AAAM to build on the work done to date. Now that we have Dave Coffey, our CEO for AAAM in place, we can bring to fruition some of the exciting projects that AAAM is working on,” said Whitfield.

Like his AAAM colleagues, industry stalwart Coffey, who heads leading windshield supplier Shatterprufe, is a respected leader in South Africa’s automotive industry and has provided strong leadership for the automotive component industry in particular.

SASSA payments: Disability grants can be collected from TODAY