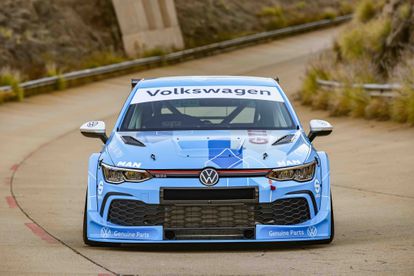 GTC is undoubtedly South Africa’s premier racing series. As with motorsport around the world, the GTC championship has not as yet turned a wheel, but as restrictions are lifted, teams are starting to get back to finishing race cars and testing their metal. For Volkswagen SA, 2020 presented a unique opportunity to defend their title in a new car. It had to be new because VW no longer builds RHD Jettas.

The car is the Golf 8 GTI-based GTC race car unveiled at a global digital event on 2 July 2020.

It’s the ideal car to challenge the 2020 contenders given South Africa’s love of the GTI nameplate and of course, given that the new Golf 8 GTI is heading our way in early 2020.

Martina Biene, Volkswagen’s Head of Brand presented the new race car to media and was quick to point this out.

“Even though the Golf 8 GTI will only be officially launched and available from South African dealers in 2021, we wanted to use this opportunity to showcase the Golf 8 GTI’s performance attributes ahead of the local market introduction.”

The car will be piloted by 2019 GTC Champion Keegan Masters as well as 2016 GTC2 champion Daniel Rowe. Keegan has already had the chance to drive the brand new car and immediately, he has noted a difference.

“The weight has been improved and the car is also more slippery through the air now,” said Keegan.

Team boss Mike Rowe, head of VW Motorsport says the gains are also going to come from the new chassis.

“New features in the Golf 8 GTI racing car include an all-new chrome moly tubular chassis which is much stiffer and lighter than the previous generation GTC car.”

Technical specifications of the GTI

The new VW Golf 8 GTI GTC race car is fitted with the 2.0-litre EA888 petrol-engine tuned to Group N regulations. It puts out 372kW/500hp and 600Nm of torque through a M-Trac sequential transaxle rear transmission. Brakes are courtesy of Brembo with 380mm 6-pot callipers up front and 340mm at the rear.

Mike Rowe expects the 2020 season to start in August with the first round suspected to go to Zwartkops Race track in Gauteng.

A side note about Eddie Jordan

The global press event was opened by none other than the charismatic Eddie Jordan. Most famed as the team boss and owner of the Jordan Grand Prix F1 team and more recently his appearances on Top Gear, he is no stranger to petrolheads the world over. But why was he presenting the opening bit for the VW Motorsport race car?

His answer – because he owes his career to the GTI nameplate. As history would have it, a young Eddie Jordan at some point after his own racing career had come to a halt, started running his own team and drivers. He found his way into Formula 3 with Toyota-powered cars and after two seasons, made the leap to GTI-powered F3 race car. The car, driven by Johnny Herbert won the 1987 F3 Championship and according to Jordan, he wouldn’t be where he is today without that victory. It is what helped him leap into F1 stardom.