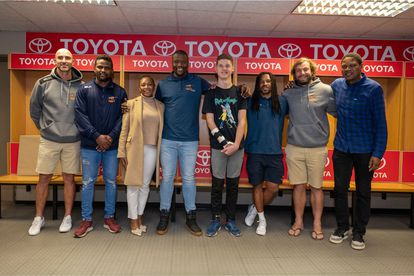 Kyle Verfaillie is an inspiration. The Bloemfontein teenager was diagnosed with Rasmussens Syndrome and went for surgery (Left Hemispherectomy) in 2017. His health notwithstanding, he entered the South African leg of the Toyota Dream Car Art Contest in which he finished third in his category (12 to 15-year-olds) last year. He won a laptop for that round and his artwork was subsequently submitted to the global competition in Japan.

With more than 530, 000 entries from 78 different countries, 15-year-old Kyle is the only South African finalist in the global competition, which features innovative vehicle designs. Finishing third in Japan, Kyle walked away with a $3, 000 (around R50, 000) cheque as well as a finalist certificate. He, together with eight other SA finalists, entered the national competition last year before their drawings were judged at global level.

To make the prize-giving day super special, Toyota South Africa (TSAM) arranged for some of the Cheetahs players – including Springbok Ruan Pienaar, Blitzboks veteran Rosco Speckman, Oupa Mohojé, Siya Masuku and Jeandré Rudolph – to attend the handover at the Toyota Stadium in Bloemfontein.

“The prize money will be put away to be used for a caregiver or aftercare for when he can no longer attend school – he currently goes to the Lettie Fouché Special Needs School. Kyle is a positive child who understands that there are others out there who are worse off than him. He enjoys motivating others by his actions such as artwork, swimming, gym and playing football, as he cannot express his feelings verbally,” says Kyle’s father Marc Verfaillie.

The Toyota Dream Car Art Contest is intended to create a platform for children throughout the world to pique their interest in cars, and even help them feel the joy and importance of having a dream. Visualised by Toyota Motor Corporation President and CEO Akio Toyoda, who wanted to inspire children to use the power of dreams and imagination, the contest is also aimed at nurturing the creativity of the next generation of great inventors, thinkers and dreamers.

The competition is open to children aged 15 and younger and comprises the following categories: Under-8, 8-to-11 years and 12-to-15 years. The competition comprises a National leg and the World Contest. The National Contest is held in each of the participating countries. The top five contestants win prizes on a national level and the top three in each category are subsequently entered into the international competition which is judged in Japan.

The art contest was first held in 2004 in Japan and continues to be one of the largest international competitions that allow children to share their ideas about the future of cars, while simultaneously encouraging them to pursue their dreams.