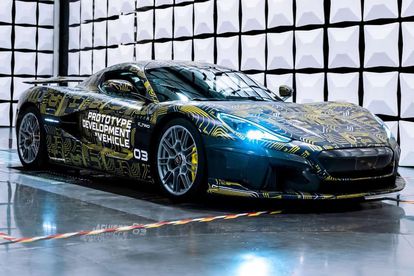 Tesla recently released its updated Model S and X, after which the company’s CEO, Elon Musk, said they would probably only continue producing them for sentimental reasons.

Tesla said the new models, dubbed the “Plaid” versions, are capable of zooming from 0 to 100km/h in less than two seconds.

Impressive, if Rimac Automobili hadn’t already beat them to it last year with the 1,427kW Rimac C_Two electric hypercar.

According to CNN, apart from its speedy acceleration, the car can hit a top speed of 415km/h, putting it in the same category as the Bugatti Veyron 16.4.

According to Musk, the Plaid and Plaid+ versions of the Model S both have a top speed of 200 miles per hour (321 km/h)The new Tesla’s maximum capacity is only 321km/h.

It is worth noting that the Veyron goes from 0 to 100km/h in 2.5 seconds, which is significantly slower than the Rimac C_Two.

Rimac Automobili is getting ready to start a production run of 150 units, priced at around $2,4 million (so not cheap) apiece. Opportunities to buy one are limited – unless you live in Dubai, where you’ll soon be able to preorder.

The enterprise was founded by Kevin Chalhoub, a Dubai-born, French-Lebanese entrepreneur with an education in clean energy and environmental engineering who said “electric is a really good fit for the market.”

“Many high-spec EVs are able to accelerate faster than petrol-powered cars, while the shorter journeys typically taken by Dubai drivers compared to their European counterparts means mean they have less reason to worry about the driving range of car batteries.”

The hypercar has a range of roughly 550km, which isn’t bad.

Chalhoub says that the EV market is currently split between “eco-conscious millennials” (among whom Chalhoub includes himself) and “tech-savvy people” that are “all about performance.”

“Today electric cars are an upgrade,” he says.

“Too often sustainable solutions are perceived as a compromise in lifestyle, but this market is different.”

The company added that they have been exposing three different generations of C_Two prototypes to a series of wind tunnel tests over the past two years to ensure that their flagship’s aerodynamics perform at the optimum level in terms of performance, range, and efficiency when it comes to handling the impact of the wind.

“Our engineering team ran thousands of CFD simulations for C_Two. Each simulation model consists of over 120 million elements with up to 180 million for the detailed heat transfer models.”

“All of which are even more important for an electric car than a traditional internal combustion-engined one. For example, on long-distance trips, the demands for cooling will naturally be lower than when C_Two is being driven on the track. At the same time, ensuring optimum range from its batteries and the car’s overall ability to fully harness its immense power and torque is also key.”

“The tests have all already gone extremely well in terms of correlation with our simulations. From the initial C_Two concept to the validation prototype, as a result of continuous optimization, aerodynamic efficiency has been improved by 34%.”